Day 5 was mostly about making good eastward progress, so I spent most of the time behind the wheel. As usual, I had rejected the usual freeway route (I-90 in this case) in favor of a smaller highway (Highway 2), and was glad I did.

Highway 2 was mostly a two-lane highway, but so straight and empty that it was easy to pass when occasionally needed. It was also safer to speed than on a heavily trafficked - and policed - freeway! Vroom vroom!

I had no major attractions or goals in mind for the day, and no hotel reservations for the night. My plan was just to drive as far as I could stand, while still stopping to see historic small towns and anything else that caught my interest along the way. As it turned out, despite the relative emptiness of this part of Montana, the day was not entirely uneventful! ## Downtown Shelby After checking out of my Best Western on the outskirts of Shelby, I made a short stop to check out the small historic downtown. It consists basically of one street and a few blocks. It had a generally empty and depressed feel about it - most businesses were closed - but parking was certainly effortless and the buildings were of some interest. The highlight for me was the great collection of vintage neon signs throughout the town. 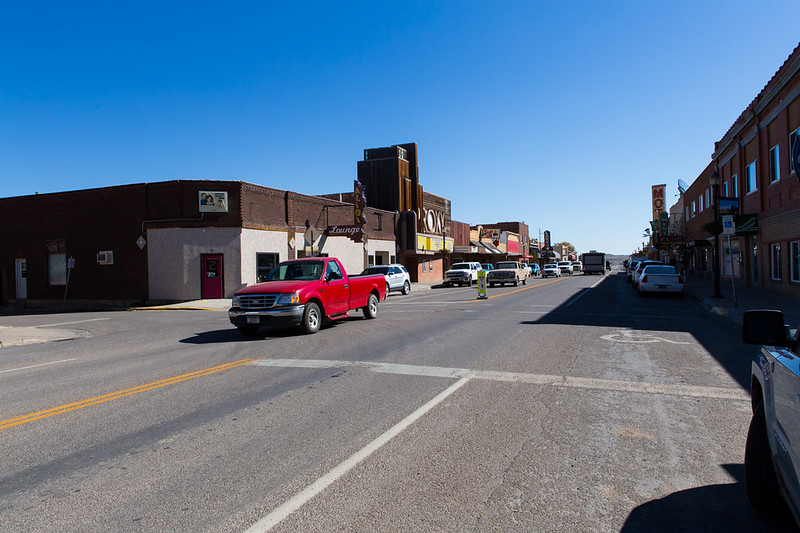 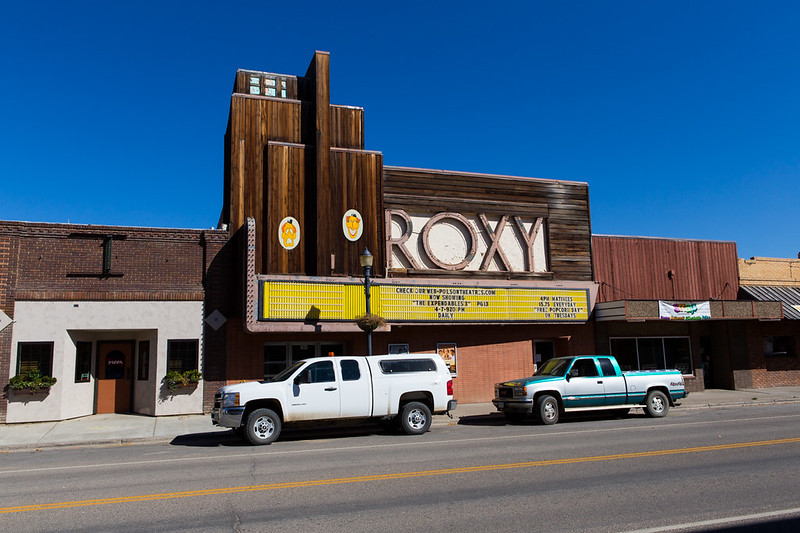 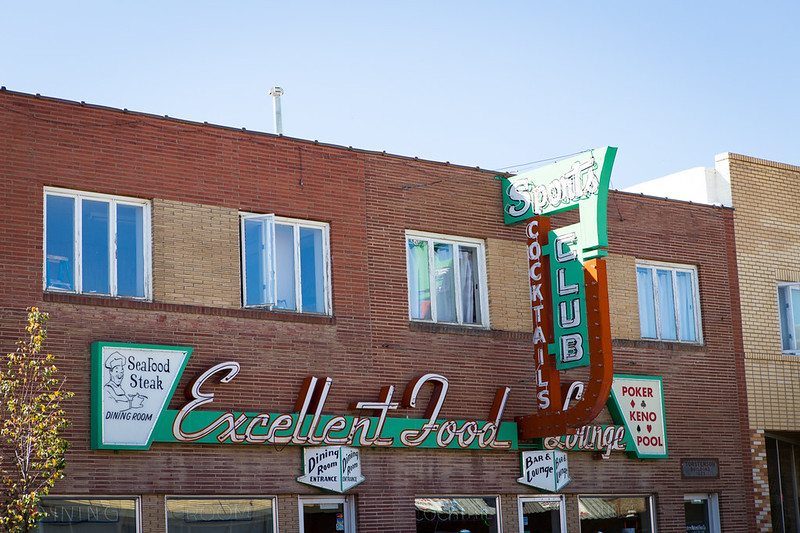 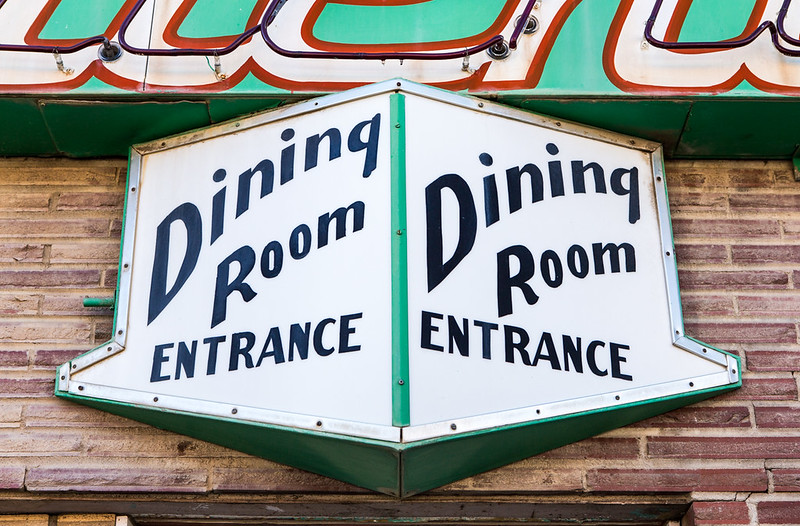 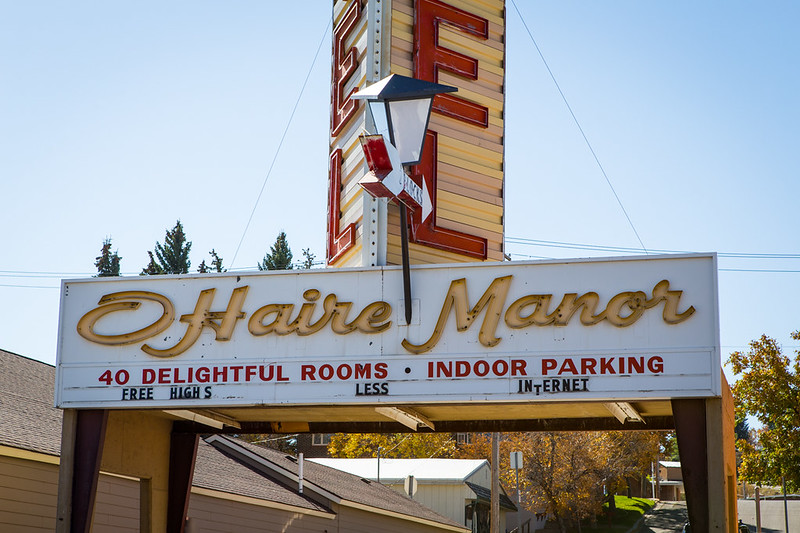 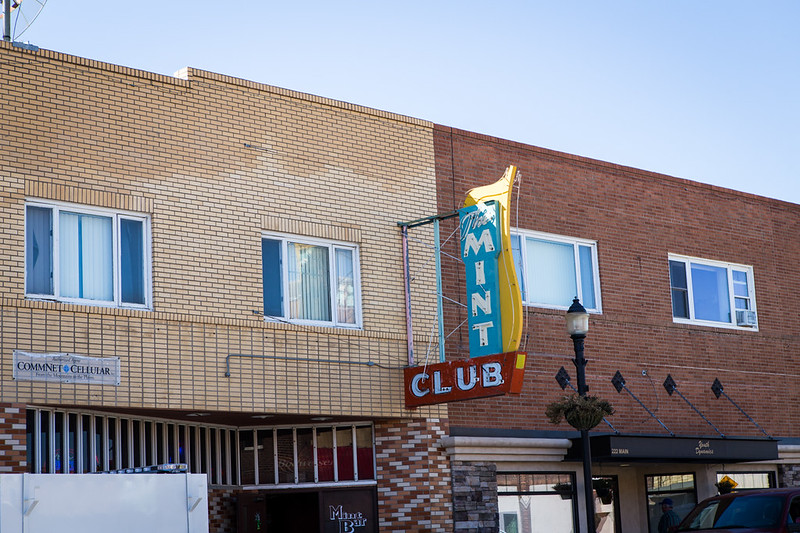 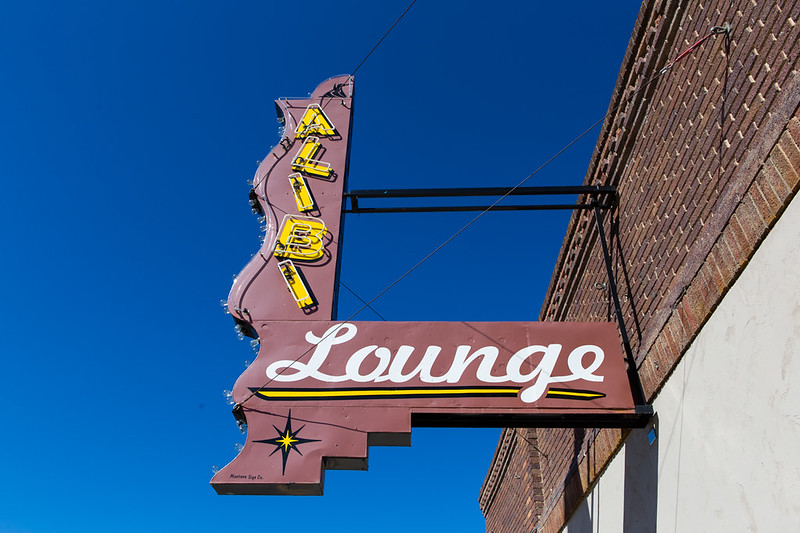 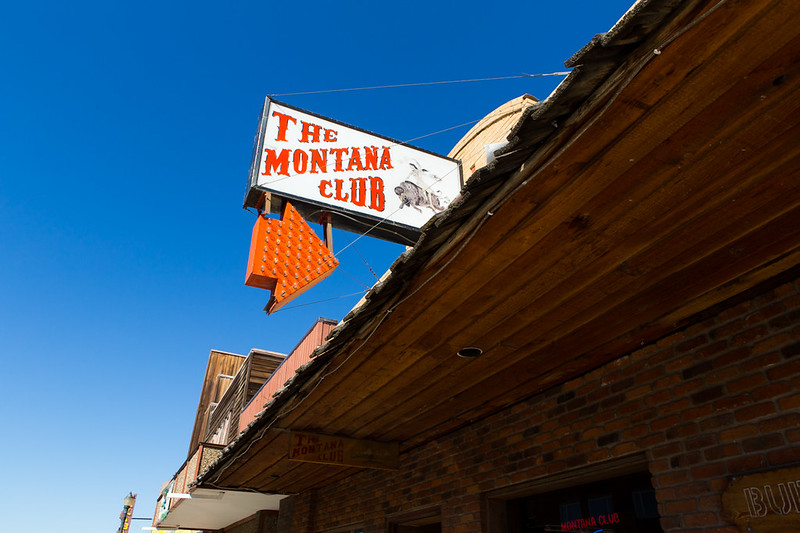 ## On the Road But my most memorable experience in Chinook was visiting the "Clock Doc." I saw his sign across the street from where I'd parked, was surprised to see he was open, and remembered I'd long been needing my dead watch battery replaced. Well, I figured it couldn't be easier than this, and it's always nice to support local independent businesses, so I crossed the street to try my luck with the Clock Doc of Chinook. 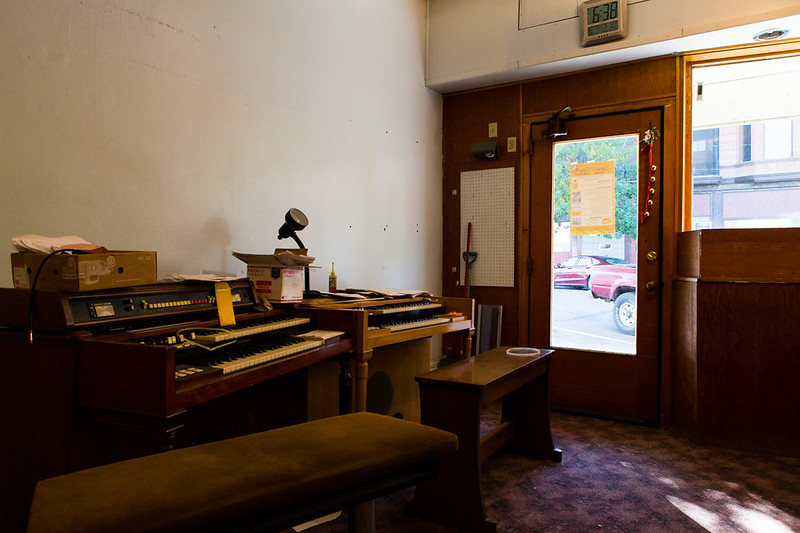 Jingle bells loudly announced my arrival as I walked in to a very unusual office. 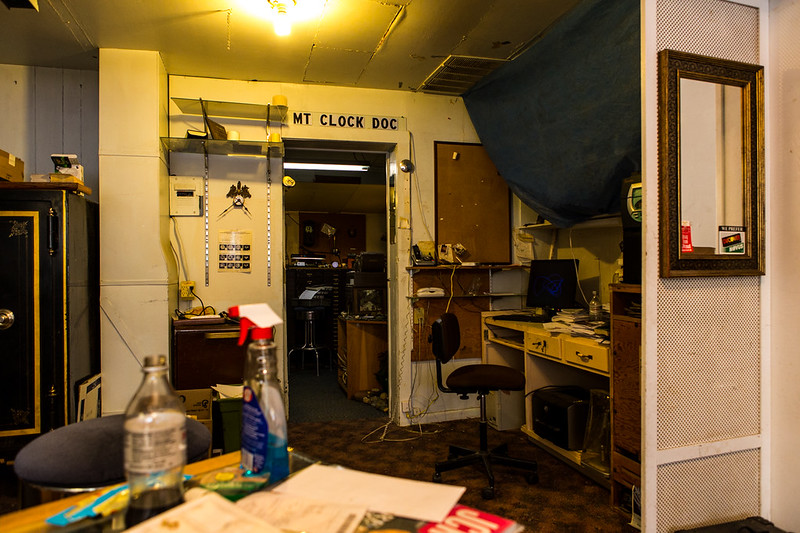 Soon a tall, skinny, mustached, somewhat odd man emerged from the back room and just sort of blinked at me. At this point I wasn't so sure anymore about my decision to support local businesses. I said, "Are you the Clock Doc?" He said yes, so I showed him my watch and asked if he could replace the battery. He took it and said nervously, "It will be a minute, so just wait for a minute, OK?" I said no problem and sat down at the messy desk from which the above photo was taken, trying not to think of Sylar. But after only a few minutes he emerged again, seeming much more relaxed after having been in his element, and handed over my watch with a proud smile. It was both ticking nicely and thoughtfully set to local time, and he said it would be $10. Thankfully I happened to have that in cash so I gave it to him with my thanks and I was on my way. What a nice experience to have my watch fixed so kindly and efficiently, and also not to be murdered. ## It Was the Best of Signs, It Was the Worst of Signs 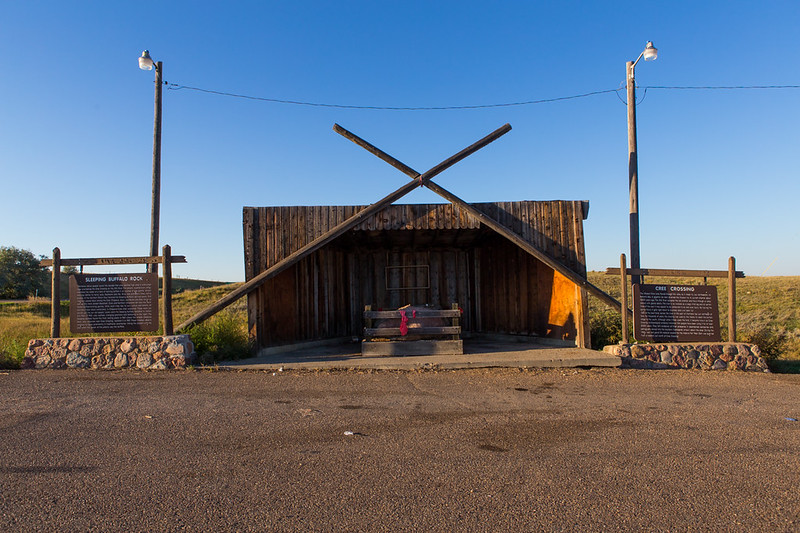 This is Sleeping Buffalo Rock, the most interesting historical marker of the day. The marker reads, in part:

A nearby wind-swept ridge overlooking the Cree Crossing on the Milk River was the original resting place of this ancient weather-worn effigy. There the boulder sat as the leader of a herd of reclining buffalo envisioned in an outcrop of granite. Incised markings made in the distant past define its horns, eyes, backbone, and ribs. Since late prehistoric times, native peoples of the Northern Plains have revered the Sleeping Buffalo’s spiritual power.

You might notice in the photo above that I left my door open. That was on purpose, as I had left the engine running and am sometimes paranoid about getting locked out when it's running - even though I think that's technically impossible with my fancy key fob. Anyway, as I headed back to the car I realized what a terrible, terrible mistake I had made. Although the shelter over the stone had just a couple of drowsy flies, the grassy area next to the car was evidentally harboring a highly active population of mosquitos. As I approached I saw they were swarming in a great cloud - the likes of which I have never seen in my life - all around and INSIDE my car. I estimated there were already a couple dozen of them flying around inside. Ack!! I have insect repellant in my trunk, so my first thought was to get that, but as the swarm followed me to the trunk I realized that was the only part of the car not yet infested and I'd really like to keep it that way. So, I did all I could think to do: get in the car with my uninvited guests and shut the door. I found a couple of napkins within reach of the driver's seat and commenced the Great Massacre. Some were dispatched to the floor with a violent clap of hands, others were smeared on the inside of the windshield - it was gory. My fancy leather interior was now littered with bodies, wings, and legs. When there were finally only a handful remaining, I hit the road, hit the gas, then rolled the windows down in the hopes of sucking them out, airplane-disaster-movie-style. This got rid of some more, but there were still a clever few that stayed out of the wind by huddling on the dashboard. So I had no choice but to spend the next hour waiting for one to land near me, then waiting for an oncoming car to safely pass if necessary, then smash. Once again I was glad the highway is lightly policed, or I might have had to take a sobriety test for the occasional swerving that ensued. Aside from the gory mess I made of my car, I'm happy to report I emerged unscathed, with not one bite. Ha! Blood-sucking jerks. When I told this story to my Minnesotan cousin a few days later, she revealed the trick for those hanger-onners in the dashboard is to turn on the defrost full blast. What a great idea, and yet how horrifying that she has extensive experience with this situation! ## Arrival in Glasgow, Montana Still feeling like there must be mosquitos in my hair, I arrived in the town of Glasgow as the sun was going down. I had done some advance research on lodging and my two best (really, only) options seemed to be the Cottonwood Inn and the Campbell Lodge. I went to the Cottonwood first, asked to see a room, wasn't really impressed, so drove to the Campbell to check it out. Some online reviews of the Campbell had described it as "retro," so that seemed like it might be a better choice for a historically-inclined traveler like me than the generic-modern Cottonwood. 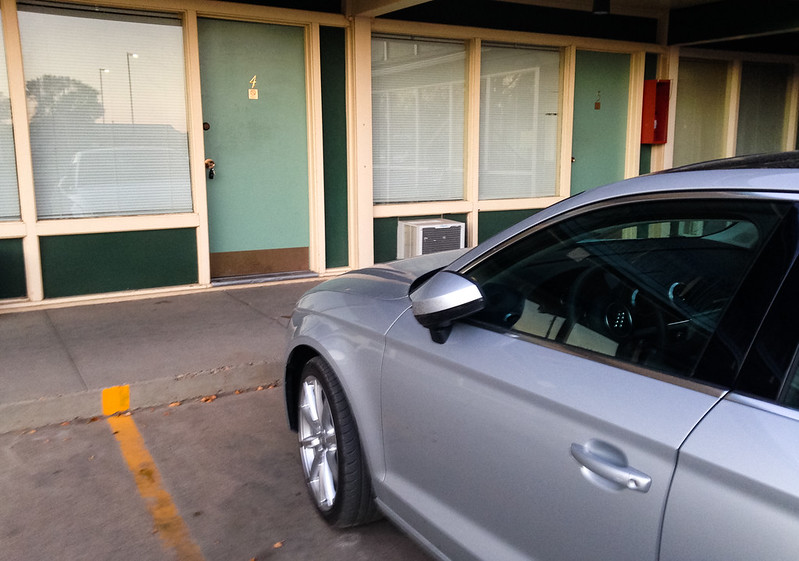 Um, NOPE. I got out of the car and looked around a bit, then immediately got back in. Retro, yes, but also smells of smoke, signs of long-term boarders, similarities to more than one murder scene on CSI, and a general air of abandonment. So back I went to the Cottonwood, with a much better attitude this time! 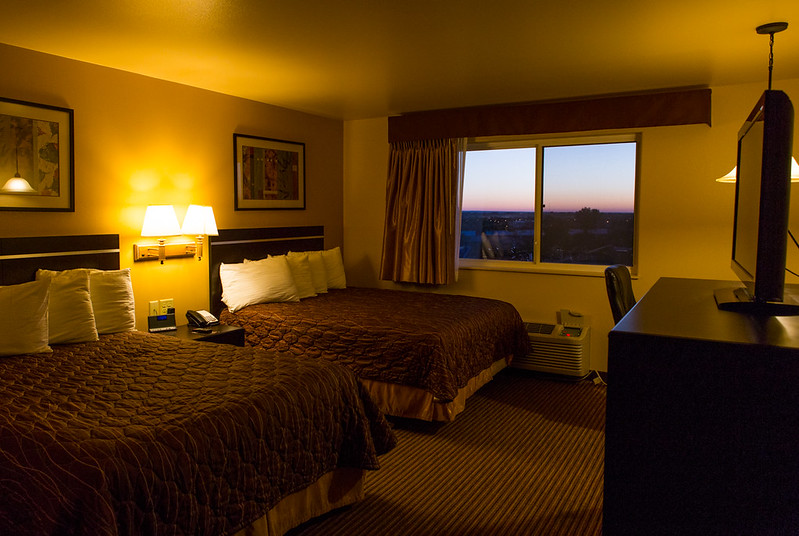 Also, the room I was actually given was a bit nicer - and smelled a bit better - than the one they'd shown me, and I was grateful for it. 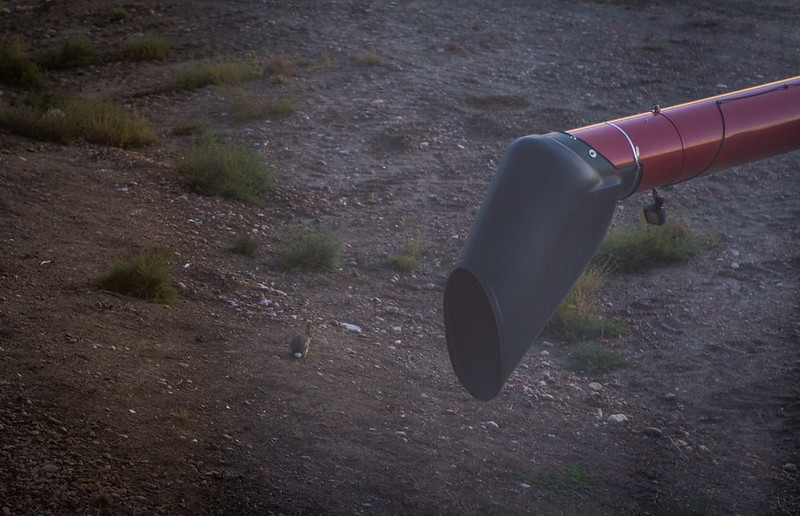 My room overlooked a farm equipment sales lot. And a BUNNY! 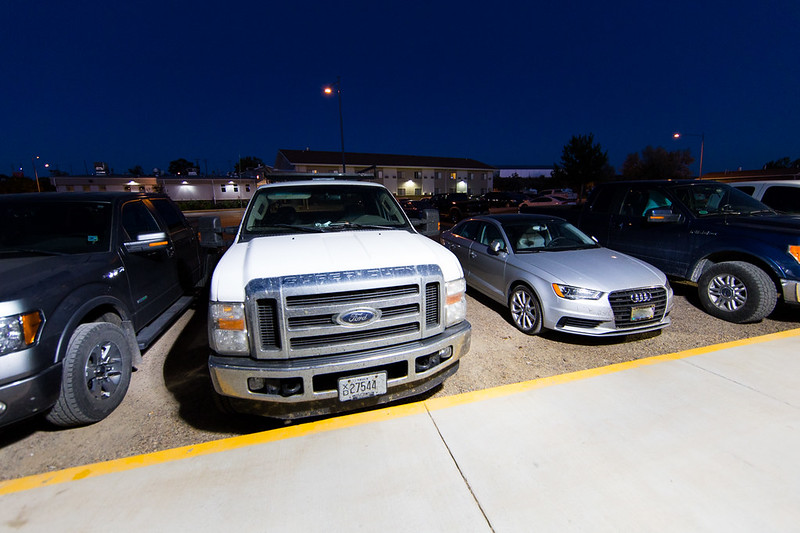 So after a long and eventful day, I hauled in my bags and went to bed, leaving my little car trying to hold its own among all the big Montana trucks.