Bulgaria is a nation lying in the eastern portion of the Balkan Peninsula, covering some 42,855 square miles. The Black Sea to the east, Greece and turkey to the south, Macedonia to the southwest, Serbia to the west, and Romania to the north form its borders. Semi-nomadic Thracians from 3500 BCE inhabited it, and a true Thracian state evolved in the 5th century BCE. A much fought-over area, it was repeatedly invaded, by the Macedonians in the 3rd century BCE, by the Romans, by the Goths in the 3rd century CE, and by the Huns, Bulgars, and Avars in the 6th century. Slavs and Bulgars successively ruled it in the 7th century, then Byzantium, the Mongols, and the Ottoman Empire between 1396 and1878. Following the Second World War it came under Soviet power. Industry fuels the bulk of the economy, with agriculture accounting for a relatively small portion. The official language is Bulgarian though regional dialects are also spoken. The 2003 estimated population was 7,917,600. 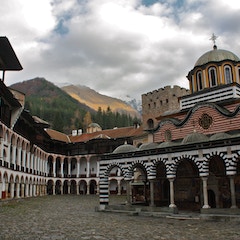