Îrān is located south of the Caspian Sea and north of the Persian Gulf. It borders Turkey, Iraq, Azerbaijan, Armenia, Turkmenistan, Pakistan and Afghanistan. The capital city is Tehran and the primary language is Farsi, although Turkish, Kurdish, and Afghan are spoken among the minorities. Islam is the primary religion. The country was inhabited in 100,000 BCE, but recorded history began with the Elmites in 3000 BCE. Three major dynasties of this pre-Islamic era are the Persian (550-331 BCE), the Parthian (250 BCE- 224 CE) and the Sassanian (224-651 CE). The Persians were able to establish an empire with the help of Cyrus the Great. This dynasty collapsed in 331 BCE when Alexander the Great conquered the region. After the fall of the Seleucid, Parthian, Bactrian, and Sassanian empires, the non-Persian Islamic princes began their rule. Following this period came the Safavid (1502-1736) dynasty (marking an Írānian state with roughly the same boundaries as present-day Írān) and the Qājār (1779-1921) dynasty. During Qājār rule, European intervention in Iranian politics began to elevate. After a famine and bankruptcy in 1921 the last of the Qājār kings, Nāser od-Dīn Shāh and Mozzaffar od-Dīn Shāh, set the grounds for Reza Khan's takeover, effectively beginning the last Persian dynasty, the Pahlavi (1921-1979 CE). Khan's son, Mohammad Reza Shah Pahlavi (1941-1979 CE), took power, and fled the country in 1979, giving way to the Islamic Republic of Írān. 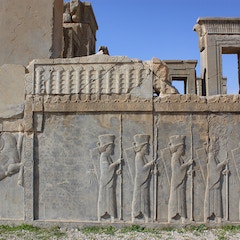