The nation of Denmark occupies the Jutland Peninsula, extending northwards from the center of western Europe, and some 400 islands to the east of it. It is bounded by the North Sea to the west, the Baltic Sea to the east, Germany to the south, and the strait between it and Norway and Sweden to the north. It measures some 16,639 square miles in area, not counting the independent territories of the Faeroe Islands and Greenland. The area was a seat of changing cultures in Stone, Bronze and Iron Ages. From the ninth to the eleventh centuries, Danes took part in the Viking raiding, trading, and colonizing expeditions that shaped much of Europe. The kingdom of Denmark ruled much of the Baltic Sea in the 12th and 13th centuries. The boundaries of the kingdom changed often between the 14th and19th centuries, most recently in 1920. The late 19th century saw a time of depression in which Danish farmers established cooperatives and the rural population became highly literature as a result of the establishment of folk high schools. The Danish tradition of social cooperation and humane governmental institutions began around this time. Denmark was occupied militarily by Germany in World War II, but resisted with some success until the local government fell in 1943; organized resistance continued however until freedom in May of 1945. The official language is Danish, a derivative of Old Scandinavian, though English and German are also spoken. Agriculture is an important economic activity, with 60% of the land under intense cultivation, about half of that devoted to grains such as wheat and barley. The raising of sugar beets and of domestic livestock such as dairy cattle, poultry, and swine are also very important. Fishing is done in the North and Baltic Seas as well as in foreign waters far abroad. Mineral exploitation consists largely of the mining of granite, kaolin, and various clays used in the production of building materials. The major manufactures are of electronic equipment, paper, machinery and equipment, processed foods, footwear, clothing, and furniture. The capital city is Copenhagen on the island of Zeeland. The 2004 estimated population was 5,405,600. 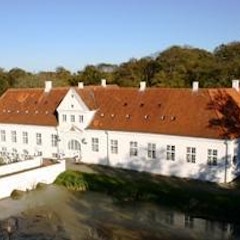