A building dedicated to the worship of one or more gods or goddesses. It is usually regarded as the dwelling place of the deity and contains a cult image.

Buildings housing places devoted to the worship of a deity or deities. In the strictest sense, it refers to the dwelling place of a deity, and thus often houses a cult image. In modern usage a temple is generally a structure, but it was originally derived from the Latin "templum" and historically has referred to an uncovered place affording a view of the surrounding region. For Christian or Islamic religious buildings the terms "churches" or "mosques" are generally used, but an exception is that "temples" is used for Protestant, as opposed to Roman Catholic, places of worship in France and some French-speaking regions. 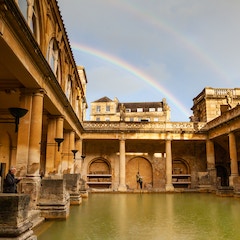