The Hannah and Eliza Gorman House has been listed on the National Register of Historic Places with the following information. Note: some of this data may have become outdated since the listing date.

The circa 1857-circa 1866 Gorman House is locally significant under National Register Criterion A in the area of Exploration/Settlement as one of only a handful of pioneer-era houses remaining in the community of Corvallis. Once common in this urban setting, today only six settlement-era dwellings remain in the Corvallis city limits, and just fourteen survive throughout Benton County. The Gorman House is also significant at the statewide level under Criterion A in the area of Ethnic Heritage for its intimate association with Oregon’s black pioneer history. The house is the only identified extant residence in Benton County that was owned and occupied by former African American slaves who crossed the Oregon Trail during the settlement period. Further, current research suggests that it may be the oldest extant dwelling in Oregon that was originally owned, during the pioneer period, by African American overland emigrants. Having been freed from bondage, Hannah and Eliza Gorman, mother and daughter, both unmarried, purchased the property and built the subject house during a period in which Oregon’s exclusion laws prohibited African Americans from owning property. As such, the building stands as an important primary resource embodying the struggles and triumphs of African American pioneers during Oregon’s settlement period. Although not being nominated under Criterion C, the wing portion of the house may have significance architecturally as a rare surviving example—perhaps the only surviving Oregon example—of a house built by or for former slaves in the form common to slave housing in the Eastern States during the eighteenth and nineteenth centuries. Preliminary study suggests that the one-story portion of this building is similar in dimensions, form, and design features (such as window, door and fireplace elements) to the single-cell slave dwellings found in Missouri and states further east. The building is not currently being nominated under Criterion D in the areas of Exploration/Settlement, Ethnic Heritage or Archaeology, although the property appears to have the potential to yield information in these areas, specifically relative to the lives of Oregon’s early black pioneer residents—women in particular—during the pioneer period and the era of exclusion laws. Preliminary study of the property, including archival research and surface reconnaissance, suggests that there is reasonable probability that the site could yield information important to the early history of black pioneers in Oregon. This information is potentially archaeological and is also architectural, in that the form and structural makeup of the building itself may reveal information about building methods and architectural forms that migrated across the continent with African American pioneers. The period of significance of circa 1857-1875 reflects the initial construction date of circa 1857 (the one-story wing), embraces the second phase of construction in circa 1866 (the 1½-story upright), and closes with the sale of the property by Hannah Gorman to Peter Polly in 1875. The building is in fair condition, and retains sufficient historical integrity to convey its period of construction, essential historic appearance, and historical associations.

The circa 1857-1866 Hannah and Eliza Gorman House is located at 641 NW 4th Street in Corvallis, Benton County, Oregon. Sited mid-block on a 75’ x 100’ city lot, the modest 925-square-foot building comprises two volumes built in two phases creating an upright-and-wing form with Gothic Revival stylistic influences. The earlier volume is the vernacular one-story, single-cell (one room) wing, built of stud-wall construction by or for the Gormans circa 1857. The Gothic Revival 1½-story front-gabled upright was built using the box construction method about 1866, and was attached to the north wall of the wing, creating the “upright-and-wing” building form seen today (Photo 1). A non-contributing, twentieth century garage is the only other building on the property. The site is simply landscaped with street trees, lawn, and foundation plantings. Although there have been some alterations to the building, most dating to the late nineteenth and early twentieth centuries, the house retains integrity from its period of significance, circa 1857 to circa 1866, in the areas of design, workmanship, feeling, location, and association. Integrity of location, design, feeling and association is high. In the area of workmanship, the building displays a surprising level of historical integrity that is visible in the spaces not ordinarily seen by a casual viewer, namely the building’s structural makeup, which is visible in the attic and storage spaces, and the substructure. In these areas the vernacular character of the building’s method of construction is intact and clearly evident. Some later nineteenth and twentieth century alterations, such as window and siding replacements, have somewhat impacted the building’s material integrity, but not to the degree that the building cannot convey its period of construction and significance. Its setting has evolved over 160 years, but remains residential in character. Overall, the Gorman house appears much as it did during the Gormans’ time of residence, retaining its historic mid-nineteenth century location, form, and plan, as well as a number of its original interior and exterior architectural features. 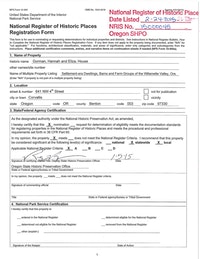 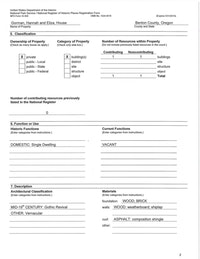 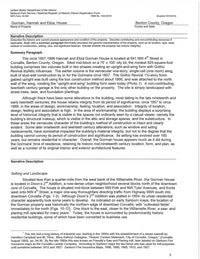 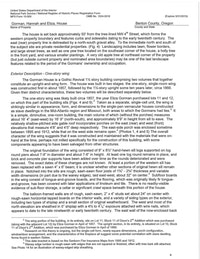 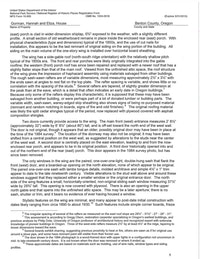 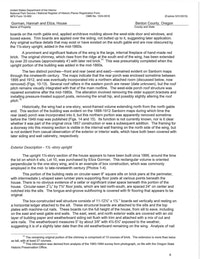 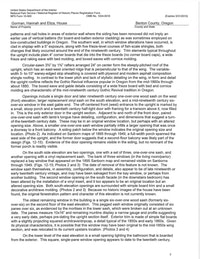 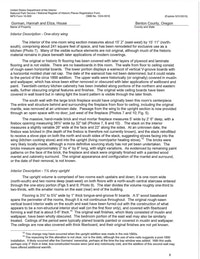 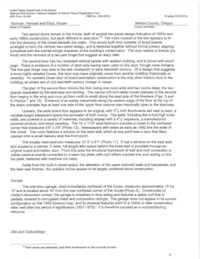 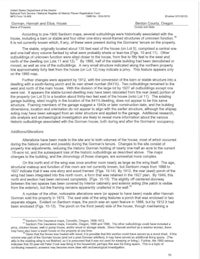