Posted on January 22, 2007 by Holly Hayes
Part of: December in Switzerland 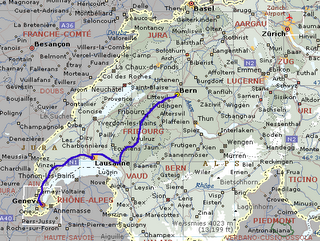 On our last full day in Bern we were divided as to what we wanted to do. I wanted to take a day trip to Geneva, mainly for its famous Reformation sites. And there is also a cathedral to see along the way in Lausanne.

David, on the other hand, was ready to take it easy and actually have some relaxation time during the vacation. Imagine! :) He also wasn't thrilled about the several hours on the train and the significant expense of two train tickets. So in the end, we decided to do our own thing for the day, and he stayed behind for a leisurely day in Bern while I went on ahead.

It was a little weird for both of to be without our trusty travel partner, but we both had a really good time and it was definitely the right decision. I ended up doing a LOT of walking, climbing steep hills at a fast clip, and even ran for a train, so David probably would have been miserable.

The main reason I did so much rushing around is that I took forever to get going. We slept in, had a very leisurely breakfast while we considered our options, used the internet in the business center for train research, got ready, went to the train station... so I wasn't actually on my way until after noon, leaving me only 2-3 hours of daylight once I got there. Ah, well. Better than not going at all.

David saw me off at the train station and gave me his cell phone with the hotel number programmed into it and we planned to be in touch sometime after dark. The train ride was very pleasant, as they nearly always are in Switzerland. The scenery was not terribly impressive, and in fact looked much like the industrial and working-class towns of Britain for much of the way.

It took about an hour and a half to reach Lausanne, and it is then another 45 minutes to Geneva. Both cities are on the shores of beautiful Lake Geneva and both are French-speaking. Lausanne is described as "the Swiss San Francisco," as it is located on a steep hill and is known for its chic culture.

I had planned to go to Geneva first since I had more to see there, but when the train arrived at Lausanne the sun was shining and it looked like a great city, so I hopped off. I took the above photo just before we arrived (through the window indicating bikes are permitted), which would show Lake Geneva on the left if it wasn't hazy.

Lausanne's train station advertises the city's status as "Olympic Capital," which just means the administrative offices of the Olympics are located there.

From the station, it was an incredibly steep walk for at least a mile uphill to the cathedral. And I had to do it as fast as possible since I needed to get to Geneva before dark!

But I really enjoyed my walk up through the city. It was clean, interesting, had upscale shops like Louis Vuitton as well as some trendy little boutiques, and a nice little Christmas market.

The Christmas market was in the heart of the Old Town, beneath the Eglise St-Francois (Church of St. Francis), whose doors were locked. The market was small but had more hot food stands than all the markets we'd been to! But sadly, no time to stop and smell the strudel.

Finally, I crossed a bridge with a good view of the New Town, and reached Lausanne Cathedral. 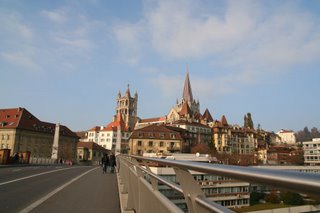 This cathedral was probably the best one of the trip, especially in terms of the experience. It was very beautiful inside, but it was made even more wonderful by the peaceful atmosphere, lack of other tourists, and beautiful choir singing! The choir and orchestra were practicing for their Christmas concert and the music filled the cathedral the entire time I was there. It was wonderful! 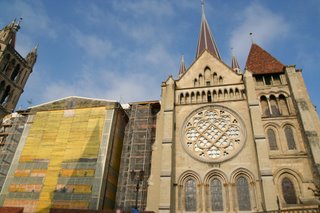 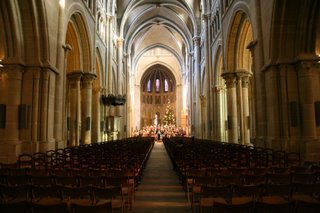 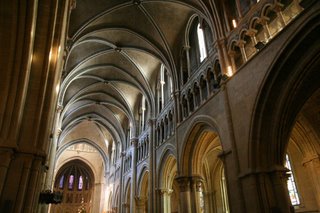 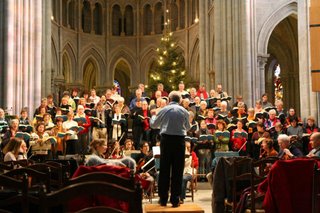 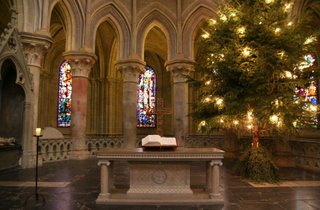 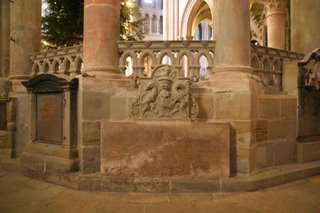 At the back on my way out, I peered longingly through a gated chapel with old choir stalls. Happily, a man came up and told me he was about to go to work there and would open it in a second (he spoke in French of course, but I caught the key words at least). He was very nice and seemed to appreciate my interest, and although the chapel seems to be a place for prayer he let me snap lots of photos of all the great carvings. I wish I could have chatted with him a little, or at least asked him the date of the carvings, but my rusty French completely failed me. Sad. 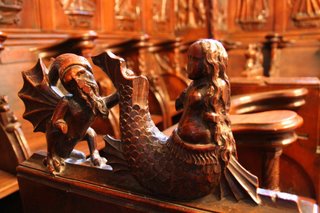 Then it was a long trek back downhill to the train station, where I scanned the departure boards, found a train leaving for Geneva in 2 minutes, ran to it, and just touched the door handle as it pulled away! And this is Switzerland - they're hardly going to stop for me. But fortunately, I found another one that was leaving in 5 minutes, and made it just in time.

45 minutes later, I arrived in Geneva, where the weather had taken a definite turn for the worse. It was very cold and cloudy and ugly, and the city wasn't all that pretty either. But I was prepared for that, and just set off to see the sites I had come for. It was a pretty long walk from the train station to the Old Town, but it did take me across a bridge over Lake Geneva.

The train station area was a little dodgy, but once I crossed the lake everything was a little nicer. My route took me through a good area with some fancy shops, but also up some very uninviting stairs.

But then I was in the Old Town, where there were quaint streets and some other tourists to keep me company.

My first goal was Geneva's cathedral, Cathedrale St-Pierre, which is perhaps best known as the church where the former priest John Calvin preached the Reformation. Calvin made even more of an impact from Geneva than Zwingli had from Zurich a few decades earlier.

Under Calvin, Geneva became a major theological center for visiting preachers, who then spread the Reformation elsewhere (including John Knox who went to preach in Edinburgh and founded Presbyterianism). It also became basically a theocracy, with Calvin and a city council imposing doctrinal and moral standards on all the citizens. It was all a little frightening, and Calvin was one stern fella. I have never been a great fan of him, but he's a major part of Reformation history (which I always found interesting), and I did part of my Master's dissertation at Edinburgh on him.

My first Calvin stop was the Auditoire de Calvin, a small chapel next door to the cathedral where Calvin founded a Christian academy and John Knox also preached for several years. It was very simple, but there were some historical collages and pictures of Calvin to try to liven things up a little.

Then I visited the Cathedrale St-Pierre. It is mostly Romanesque (i.e. fairly plain and with great carved stone capitals) but later had a weird Neoclassical facade tacked onto it.

Next door to the cathedral is the Museum of the Reformation, but I decided instead to take the tour of the archaeological site beneath the cathedral, which includes two 4th-century Christian sanctuaries, mosaic floors from the late Roman Empire, portions of three early churches, and an 11th-century crypt.

I did a very, very quick walk-through of it (thankfully I was the only visitor down there) and photographed what I could. It was mostly just piles of rubble, but the mosaics were interesting.

Then, running out of daylight, I hightailed it through the Old Town and then down a very long ramp to the huge Reformation Wall. I thought that was very cool. It stretches nearly the entire length of the city park and has larger-than-life-size statues of Calvin and his Geneva posse in the center (including John Knox). 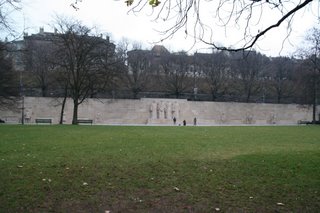 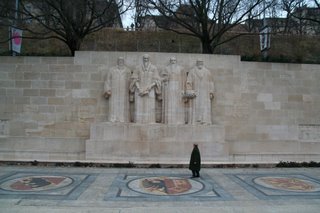 The rest of the wall has smaller statues and reliefs of people and events in the history of the Reformation, with accompanying narrative inscriptions in the language of wherever it happened (French, German, Dutch or English). One of them was the Pilgrims praying the decks of the Mayflower on the way to America.

After this I had planned to go to the part of the city that has the European branch of the United Nations, the headquarters of the Red Cross, and all that good stuff, but I just couldn't do it. It was getting dark, I was cold and tired, and I had a two-hour train ride between me and home, so I was ready to go.

I took a different route back to the train station, though, and saw a few more interesting sights. One was a synagogue that I had written an article on for my website long ago, which was neat to see. I was hoping to be able to go inside, but alas, a guy approached me and politely asked (in English) if I was Jewish. Since I wasn't, I couldn't go in, as there was a service in progress. Bummer.

A few blocks later I came across a small church that I wandered in, and it seemed a service was about to start. It was neat inside, and so I quickly took a few photos - with some interesting effects! I had been walking the freezing streets with my lens cap off, and when I came in the warm church, my lens fogged up! Never had that happen before.

Back at the station, I had just enough time to buy American Vogue, French Glamour, German Glamour, a Twix and a Nestea before there was a fast train to Bern. I had to rush for it a little as usual, but made it.

I was so happy once I was back on the train - I had all my goodies, a clean bathroom to use (yes, even on the train!), and was on my way to a delicious dinner with David. The hours passed fairly quickly, and David called my cell phone from the hotel just as he said he would, and we planned to meet at the wonderful rÃ¶sti place from the night before for dinner at 7.

When I arrived in Bern, it was a much longer walk from the train station to the restaurant than I remembered, and so very cold! I arrived about 5 minutes after 7, and looked all over for David but he was nowhere to be found. I wandered around outside and watched a couple trams from the hotel come and go without him getting off, and was just starting to get worried when he came walking up from the other direction. It turns out he had decided to surprise me by meeting me at the train station, but there were so many cars to the train and two different exits from the station that he had missed me.

We settled down to our wonderfully warm rÃ¶sti - we both had the cheese, ham and egg version I had the night before and it was fantastic - and had fun catching up about how we each spent our day. David has promised to do his very own blog post about what he did in Bern, so hopefully that will show up tomorrow or sometime soon.