Churches in Fribourg and Roesti in Bern

Posted on January 19, 2007 by Holly Hayes
Part of: December in Switzerland

*The Rough Guide to Switzerland couldn't rave enough about Fribourg, a French-speaking city about 15 miles from Bern. The book said Fribourg is "one of Switzerland's best-kept secrets" with a "winningly attractive medieval Old Town" and steep cobbled streets that are "picturesque and characterful." And its university "generates a social dynamism that is tangible on the streets." Well, how could we not go? We actually ended up not being as bowled-over by Fribourg as we expected, but maybe we just had too high of expectations from the effusive praise of the guidebook.

It really was picturesque in parts, was nice and medieval, had a fine cathedral and some interesting sights here and there, and there was nothing wrong with it at all - but overall I was more impressed with the beauty and medievalness of Zurich's old town.

One interesting thing about Fribourg was how different the general feel of the city was. It really felt like we'd left Switzerland and gone to France, and we'd only been on the train for 20 minutes! Suddenly everyone spoke French and all the churches were Catholic and it just didn't feel "Swiss" anymore. Although it was nice to understand more of the language for a change, I still felt happier back in German Land.

Nevertheless, we thoroughly explored the city, and I do mean thoroughly! We visited no less than seven churches (some rather quickly). We walked down the very steep cobbled streets of the Old Town down to the river, walked across a quaint covered bridge, and hiked up the steep hillside on the other side to cross the main bridge into town.

Then there was another hill and steep covered stairs to get up to one church that sounded especially interesting, but it was closed. Our only refreshment was cold water from the fountains and hot roasted chestnuts from streetside stands - not bad!

The sights were almost all churches, but there was also: a town hall, a tractor in the street, a Napoleonic soldier, a plaque for a yodeling contest, a Star Trek portal and a funicular that runs on sewage. Yes.

First up was the cathedral (Cathedrale St-Nicolas). This one is still a bona fide cathedral since Fribourg is still Catholic. In fact, Pope John Paul II celebrated Mass here in 1984.

The cathedral is High Gothic and was begun in 1283. The outside is quite interesting, as it just looks like a big tower, and traffic rolls right past its front door at rather alarming speeds. At its base is a single enormous portal, carved with the Last Judgment and some saints.

We're no architecture experts, but we really thought the stone of the portal carvings just didn't look that good. It looked fake or too gray or something, and it looks like low quality stone. But the carvings were still interesting, with a twisting-and-shouting saint and the usual horrors of damnation above the door.

*The Rough Guide says: "The vast interior is immediately impressive, its mustiness and gloominess redolent with old incense." But we found it to be neither musty, nor gloomy, nor redolent with anything. And despite being Gothic, the interior wasn't terribly impressive.

The interior was narrow, not that high, and a large part was under major renovations. The altar area was fenced off with a screen, which made the nave appear short and took away the beauty of the choir and altar. But the nave walls were uniquely decorated with flags and old paintings, which was attractive.

Most of the stained glass windows are modern Art Nouveau, and quite colorful and detailed. They reminded me of the intricate scenes I used to love to color in with markers, except that some depicted rather gory scenes of martyrdom.

The locked screen in front of the altar was mighty annoying, as there were some fine wooden choir stalls and a nice altarpiece hidden behind it. I did the best I could through the screen.

The one way in which our guidebook did come through was in making sure we checked out the Chapel of the Holy Sepulchre on the way out. This side chapel, which we might have missed otherwise, has a very nice sculpture group bathed in the blue light of a modern stained glass window. 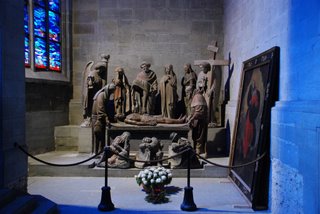 It was sculpted in 1430 and shows the dead Christ being laid in the tomb by Joseph of Arimathea, with saints and angels looking on and three soldiers sleeping nearby. The faces are very expressive and interesting.

When we left the cathedral, the sun briefly came out, giving us some pretty shots of the side and back.

Some scenes from our walk (hike) all around the city after the cathedral:

These were some of the more unique sights along the way, some of which I mentioned earlier:

The funicular is powered by raw sewage, which it diverts into a chamber beneath the car at the top to make it heavy enough to pull its partner up the slope. Needless to say, it didn't smell pretty. The Napoleonic soldier was friendly and happy to smile for a photo, but seemed a little embarrassed by his outfit. Must be Europe's version of our Civil War reenactments.

And finally, a brief rundown of the other six churches. First there was the church of the Augustinians, with a faded fresco in the portico, some really sad altars being held together by masking tape and a nativity scene with a pat of butter in place of Jesus. Hmm.

We had the church to ourselves, so we got to run amok. I went to great lengths to fit the main altarpiece into a photo - I still didn't entirely succeed, but at least it was the first crunch I had done in months.

The Basilica Notre-Dame was very hushed and Catholic-feeling, and some women came in to pray in the Chapel of the Blessed Sacrament during our visit. The best part of the interior were some votive plaques in French and German dedicated to St. Joseph and Mary, some of which were in thanks for protection during World War II.

The Eglise des Cordeliers was right next door to the Basilica Notre Dame. We had it mostly to ourselves, except for a couple of other tourists that wandered in. The most interesting aspect of this one was what seemed to be a full replica of Our Lady of Einsiedeln - marble chapel, gold robes and all.

In the choir there was a nice painted altarpiece that was illuminated by putting a few francs in a machine nearby.

We hiked all the way up some ancient covered stairs (included in the general photos above) to see the Jesuit Church of St. Michael by the university, but alas it was closed. This is also where David found his portal. At least we got some nice photos of the outside in the late afternoon light.

The last church we explored was in some ways our favorite of them all. First of all, I actually managed to exchange full sentences in French with a caretaker who was sweeping outside, regarding whether it was open and how we get to the entrance. That was very exciting.

And the church itself, which is Fribourg's main Reformed church, was very simple and rather modern, but also very friendly, inviting and full of life. The sanctuary was decorated with little else than dozens of wonderful paper ornaments made by kids. Below the church were recreational rooms, clean public toilets, and announcements for various types of charity work. It was a nice friendly note to leave Fribourg on. 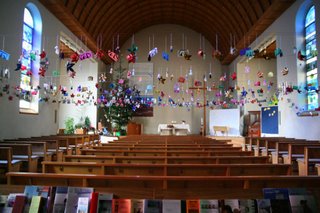 We had two more 100g servings of hot chestnuts (they are SO GOOD) outside the train station, then I checked out a big sale in Benetton, where I had an only semi-successful French conversation with a sales girl about a jacket I didn't buy (my brain was cramping up by then and getting all mixed up with German). One thing that was interesting about Fribourg is that no one ever spoke English to us, despite our halting French and sometimes blatant use of English. That was very good for language practice.

Then, shortly before dark, we were on the train back to Bern. 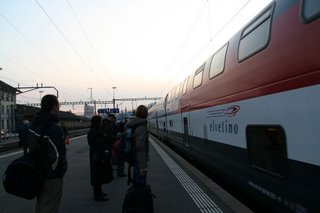 In Bern we got a little lost from the train station because we left from a different exit than usual, and it was really, really cold as we wandered around. But soon we were back to the familiar stomping ground of the clock and fountains, and set out to find a good Swiss dinner.

I had researched the matter the night before, and our guidebook recommended a place called the Anker. We didn't love the looks of it at first, because it was quite smoky. But after 15 more minutes of wandering around in the cold looking for an alternative, we decided it was really our best bet for good Swiss food and worth braving the smoke for.

And we were right. We started with the first genuine Swiss fondue of the trip, which came in a fun iron pot with a bag of bread pieces. But we did not like it! It was way too strongly flavored, even for David. I believe the strength came from a very strong cheese and/or from very dry wine or other booze mixed in. Whatever it was, it was just too much, and we didn't each much of it. 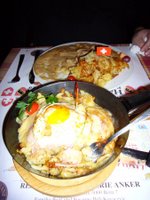 Our main dishes were quite a different story. The restaurant's specialty is rÃ¶sti (their website's domain is www.roeschti.ch), and both of our dinners involved the wonderful stuff. David had some kind of meat with cream sauce and a side of rÃ¶sti, which he liked.

But mine was better! I got a full rÃ¶sti dish, which consisted of a whole lot of those fabulous grated potatoes topped with ham, cheese and a fried egg. It was wonderful!! Unfortunately the photo doesn't do it justice, because I only used the little camera and had to use flash.

After dinner we waddled across the street and shivered for 8 minutes while we waited for our tram to take us across the bridge and home.

There are some more photos of Fribourg here on Flickr.