Posted on January 16, 2007 by Holly Hayes
Part of: December in Switzerland 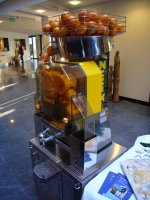 We had breakfast in our hotel every morning in Bern, which was absolutely fantastic. Fresh-squeezed orange juice came out of a nifty machine, there were scrambled eggs and sausages, and there were about seven different kinds of bread and three different kinds of croissants! I had a delicious wheat croissant every day and miss it very much.

Another major highlight of breakfast was bircher mÃ¼esli. I've never had anything quite like it and it was wonderful - delicious, hearty, and kept me full until nearly dinner. When I got home I found this recipe for it but so far haven't been able to recreate it quite right.

Its basic ingredients are oats and grated apple, to which is added either apple juice or milk to soften the oats, then yogurt and more diced fruits and nuts. YUM. I am determined to learn how to make a good one here at home. And I can't believe I didn't take a picture of it!

Over breakfast on one of the days we sat near a businessman who talked on his cell phone for most of the time. This was not unusual, but what we really enjoyed is that each call was in a different language! He first had a long conversation in German, then called someone else and spoke in French, and then called a third person and spoke briefly in Italian. And I am sure he speaks English, too. What a wonderful thing that must be!

Bern was very enjoyable and we were glad we chose it as our base for staying several nights. Lots of interesting streets, shops and sights to explore, and it's a major rail hub so you can go to other cities in a flash (which we did).

And of course, Bern has churches! There were lots of interesting ones, none of them super spectacular, but all nice in their own way. We started out by heading to Bern's big Gothic cathedral, the MÃ¼nster.

*MÃ¼nster comes from the same root as the English "minster" and technically refers to a monastic or collegiate (i.e. run by a college of canons) church.

But in practice, a mÃ¼nster is often a cathedral that became Protestant, and thus isn't a cathedral anymore. (*Dom, not mÃ¼nster, is the German word for cathedral.)

Bern became Protestant very early in the Reformation and nearly all the churches we saw were Protestant. The photo at right is the Moses Fountain in the MÃ¼nster square, with Moses pointing to the commandment against idolatry. A strong visual statement to say, "take that, you Catholics and your idolatrous religious art!"

When we arrived, there was a Christmas music service going on, and we sat down and joined for awhile.

The huge church was really quite packed, but everyone looked quite casual and relaxed. It was quite a change from the small, very devout crew at Einsiedeln.

There were some nice German hymns, and then a woman sang Amazing Grace (in English) a capella from a balcony, which was very beautiful.

The service wasn't due to be over for quite awhile, so we headed back out and checked out the exterior of the MÃ¼nster and its Christmas market. Sadly, the market was not very impressive. It had nice arts and crafts like in ZÃ¼rich, but it was quite small and had no food stands. Humph. There was at least gluhwein (hot spiced wine), which no self-respecting Christmas market can be without.

The exterior of the MÃ¼nster is quite lovely and impressive. It has a rather unique shape - all portals and spire, with nothing in between. It reminded me of a rocket ship.

One of the MÃ¼nster's most famous features is its magnificent central portal, which has an intricately carved and painted depiction of the Last Judgment (a common theme for portals). Fortunately the Reformers left it alone, and it is one of the oldest examples of this type of medieval art that survives. As with most depictions of this scene, the Hell side (right) is more detailed and interesting than the Heaven side, and contains some local hated characters.

We would have to return later to see the inside, so we moved on to the MÃ¼nster Plattform behind the cathedral, which is a nice little park with a great view of the river, and then headed back into the city center for more exploring.

Bern's most famous landmark aside from the MÃ¼nster is the Zytglogge, a big painted clock tower. It's very pretty, and apparently the Man With the Golden Butt at the top does something when it strikes, but we didn't see that. 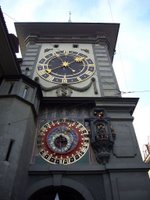 And as I've mentioned before, there are lots of great medieval fountains dotted throughout the city, colorfully painted and standing right in the middle of the cobblestone streets. 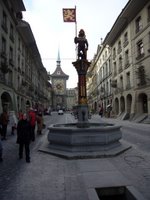 And what is really amazing is that you can drink out of any one of them! This is despite the fact that the water apparently runs open down the middle of the street. We tried a few times and it tasted great, but it's difficult to do without getting rather wet. But at least it's plenty cold!

The most famous fountain in Bern is the Ogre Fountain, depicting a monstrous-looking fellow chomping on human children. It was on the street that leads across the bridge to our hotel, so we saw it often. Eating children is bad enough, but what is really controversial about it is that it may illustrate the widespread medieval myth that Jews ate human children in secret rituals.

We visited a couple churches we came upon as we walked, including St. Peter and St. Paul by the old town hall (which is seen on the right in the below photo). It's a fairly new building, and belongs to a Catholic-Protestant hybrid denomination called "Christ Catholic," considered heretical by the Vatican. There was a locked gate at the back of the nave, so we contented ourselves with some photos from the back.

Much nicer than this one was the Heiliggeistkirche (Holy Spirit Church), which is a purpose-built Protestant church dating from the 1720s.

It's in the heart of the city center right next to the train station, and has an active outreach program to the poor and homeless. They serve free bread and soup every Tuesday, and I bet it's delicious! The interior was Baroque, but not at all overdecorated. It had a pretty painted ceiling, galleries, and interesting round pews centered on a big pulpit at the front.

It also includes old choir stalls from the 1500s or so, saved from the church that used to stand on this site. They had different coats of arms on each of them and were very interesting.

Our final church of the day (other than our return to the MÃ¼nster) was the Nydeggkirche, built in the 14th century. In its courtyard was the symbol of UNESCO, representing the entire city of Bern's status as a World Heritage Site.

I wonder how many World Heritage Sites we've been to now? A lot of people keep track and try to visit as many as possible (like this German guy). Fortunately, there are lot in England! Anyway, the Nydegg Church was pretty simple and not too exciting, but we had it to ourselves and we got to play a xylophone!

From there we crossed the river towards the Barengraben, and had some nice views of the river and back at the Nydeggkirche on the way.

The Barengraben (Bear Pits) are another Bern icon, like the clock tower and fountains. The city is named for bears and they keep several live bear mascots in this big open pit in the city. It sounded pretty cruel and horrible, but it actually wasn't too bad - no worse than a zoo, anyway. The bears were so cute, just like teddy bears.

Then it was a longish hike back to the MÃ¼nster to finally tour the inside. We strongly considered a bus but decided to walk instead. It was cold, but good to see the sights. By the time we arrived it was late afternoon, which made for some really nice warm light on the stone. Be sure to enlarge the second photo to see the wonderful gargoyles!

We had a really fun time touring and photographing the MÃ¼nster. It had the good Gothic soaring heights (although its tower-heavy design prevented the ceiling from being too high), really nice stained glass windows, and interesting details all over the place. 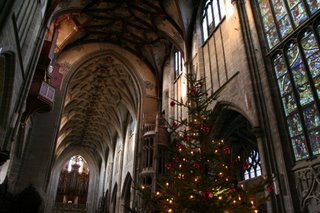 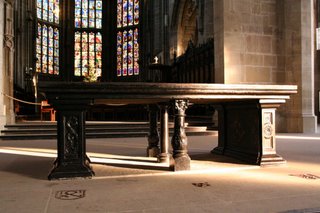 The details included this hilarious "Dance of Death" window:

and the low sunlight shining in through the windows in various beautiful ways:

We should have climbed the tower to take advantage of the city views in the beautiful evening light, but we just didn't have the energy.

So, it was back across the bridge to the hotel to relax and think about where to have dinner.

I was feeling very happy sitting on the bed back in the room, and was thinking I'd be just fine to go without dinner - which is not to say without food, as we'd been trying various goodies from bakeries throughout the afternoon. Our favorites were a sugar-covered donut ball and the pretzels. Yum. Again, I'm sorry to say there are no pictures - apparently some things are just too tasty to even think about photos!

But David somehow got a second wind, and was determined that he would at least need to go back out to get some Diet Cokes for the evening (Pepsi is rare on the Continent for some reason). But fortunately he was happy to let me stay in the warm room, and said he would pick up dinner while he was out!

He tried out the tram for the first time, which stops right outside our hotel and is absolutely fantastic, so he wasn't gone too long. There isn't much take-out in Bern and we didn't want to spend much after our big night at fancy Chinese, so he came back with McDonalds! There's no shame in it under such circumstances and we enjoyed our semi-cold burgers (it was well below freezing out there!) while watching some more German TV, and had a nice relaxing evening in.

Next up: A day trip to Fribourg.