Posted on January 14, 2007 by Holly Hayes
Part of: December in Switzerland

When I last left off, we had gone up to the Schilthorn in the morning and were now on the train between Spiez and Thun on the way to Bern.

We arrived in Thun (train station pictured above) around 5-ish. Our stop in Thun was no more than an hour and there wasn't anything terribly exciting to see there, but it was nice to see another Swiss city besides the more famous ones.

Thun was a lot larger than we expected after our visit to Spiez - a big, modern city. But it was quite pleasant, and it also had medieval city walls, a castle and a church on the hill. We didn't visit any of those, but we crossed the river into the Old Town and made a good-sized loop to get a good impression of the city.

The main highlight, in addition to the pretty river, was a very cool main street with two levels of streets with shops. It was great for window shopping, and most shops were even still open. I especially liked the looks of a huge natural-foods store that I would have loved to stock up in. The Swiss are great with the tasty health food.

At the end of the double-level street was a medieval square with a nice town hall (which is an unpleasant sounding "Rathaus" in German), the city walls and the castle.

Then it was back across the river via a different bridge (with a view of a nice Lucerne-esque wooden bridge)...

..to the Christmas market, where I saw more of my favorite paper lanterns and David bought a big sausage...

...and I got a brief glimpse of the church, of which it was sadly impossible to get a sharp picture without a tripod (or a better camera).

Apparently in the daylight there is a fine view over Lake Thun and of the peaks we saw in Murren: Eiger, Munch, and Jungfrau. Our travel book also provided this rather interesting fact: after World War II, the Swiss authorities decided that in the event of a future invasion, all of Switzerland south of Thun would be abandoned and the population would gather here for dispersal into mountain retreats. That's craziness! What about the big, tough citizen army that ensures their neutrality?

Then it was back to the luggage lockers and back on the train for the 15-minute ride to Bern, where we would stay for our last 4 nights in Switzerland.

We decided to walk all the way from the train station to our hotel in Bern, which turned out to be quite long and quite cold! And the sidewalks were rather crowded with everyone coming home from work and going out for the evening, in addition to a few other tourists. But there was a lot to see so it was an interesting walk. 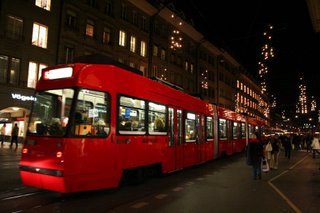 Our first impressions of Bern were very positive - our walk was down the elevated sidewalks of a medieval arcade lined with shops, beside wide cobblestone streets with shiny red trams going by. Bern is also known for its many medieval fountains in the streets, and we saw several interesting ones on the way to the hotel.

Our hotel was to the north of the city across the river over a big bridge. As we walked along, we peered over the side and both exclaimed at how interesting the reflections in the water were - it made it look like there was another whole level of the city down there. And then we realized there was another level, and the bridge was much higher than we thought! These pictures are so blurry as to be nearly worthless (my arm was getting tired and shaky), but give you the general idea.

A couple bridge views in the daylight, looking towards our hotel:

Our hotel was the Hotel Allegro Grand Casino Kursaal, an ultra-modern business hotel with a casino and several posh restaurants upstairs. The modern minimalist design really appealed to me when I found it online, and David found us a fantastic deal for it. It was an excellent place to call home for multiple nights. It had a nice open plan, and the "hallway" to our room overlooked the Italian restaurant, which doubled as the breakfast area:

Our room was clean and very nice, and we had a fancy personalized welcome waiting for us on the TV screen.

It was late and it had been a long day and we didn't feel like going back out into the cold into town, so we decided to splurge on dinner at one of the hotel restaurants. We decided on the "modern Chinese" one called YÃ¹, and David made us a reservation for 8:10.

That left us with about 40 minutes to kill, so we did some exploring around the hotel. We went first to see the casino, which was on the top floor next to our restaurant. It turned out to be quite a big deal, with two security men blocking the entrance before you check in at the desk, where they require passports (and an admission charge from non-guests). We had left our passports in the room, so it was a no-go for the time being.

So we headed for the "wellness center," which is free for guests. It included a new but rather unimpressive gym, a very inviting-looking jacuzzi, and a Finnish sauna - with a naked man sitting in it. He looked rather alarmed when we opened the door and stuck our heads in! Next we found a special little shower room which had all kinds of fascinating settings like "Polynesian rain." We tried a lot of buttons and got a little wet in the process, but had a wonderful time.

Then it was time to act like adults and go to dinner. It was such a fun experience, especially as we almost never go to fancy dinners. It reminded David a little of when he used to go out with his college friend whose father is a multimillionaire - but that always involved multiple $100 bottles of wine, too! We sat next to a window with a nice view, and were served by a nice young waitress who spoke Chinese, German and English fluently.

We started by ordering Chinese tea, which turned out to be far more complex, but more interesting, than the usual pot o' oolong. We were brought a tray of about 10 different bowls of tea leaves, and explained the unique flavors of each one. I don't remember our choices, but they were good and came in the loveliest little brown ceramic pots on an elevated round tray.

Next was appetizers: seafood soup for David and glass noodle salad for me. Both were very delicious, but mine had a hot chili sauce in the bottom that disqualified part of it for me. David took care of it for me, though! For the main course, I got dim sum, which included little Chinese spring rolls (yum), Vietnamese spring rolls (not so good) and a stuffed beancurd roll (good). David got wok-fried beef, which he loved.

Dessert was probably the very best part for me (it often is). It was a three-part dish of dark chocolate mousse, white chocolate mousse, and exotic fruits. The mousse was to die for! David got a dessert too, but we can't remember what it was. Obviously, we really went for it with all the courses! But dinner at such an expensive restaurant is something we do once a year or less, so it was all good.

After dinner we went back up to the casino, passports in hand, to see what it was all about. Neither of us is really interested in gambling, but we enjoyed watching Texas Hold 'Em poker for awhile and then putting a few Francs in a couple slot machines. Alas, we didn't win anything. We didn't stay very long, in large part because smoking was permitted and it was almost unbearably smoky.

Then it was back to the room for the usual evening ritual of downloading photos onto the laptop, switching through German-language TV channels, and reading the travel book for the next day's explorations. On TV we found a German version of Who Wants to Be a Millionaire, and with the help of my German-English dictionary and lots of guessing, we actually got some questions right!