A Stop at the Schlosskirche in Spiez

Posted on January 8, 2007 by Holly Hayes
Part of: December in Switzerland

We hadn't done too much walking on our day in MÃ¼rren and the Schilthorn and were feeling pretty energetic, so we decided to explore a couple more towns on our way to Bern. Our first stop was Spiez, a town of about 12,000 people along Lake Thun. 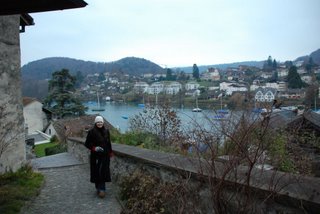 The main reason for our stop here was a brief mention in our guidebook that it had a castle and a Romanesque church with old frescoes - my favorite! As a bonus, the two are right next to each other - the church is called the Castle Church (Schlosskirche).

Spiez' train station is at the top of the town, and overlooks the harbor, lake, and snow-capped mountains on the other side. It would have really been beautiful if the day was clear. We stashed our bags in another one of those wonderful lockers and were off.

We were pretty sure we spied the castle from the station, and began the walk steeply downhill towards it, but we got a little lost when we could no longer see either the castle or harbor. The town was very quiet and we saw no other tourists, and I didn't really expect the inhabitants to speak English.

So when we found a lady crossing the street towards us, I said Entschuldigung, wo ist die Schloss? (Excuse me, where is the castle?) She began to give us directions in German, fortunately with hand gestures in the direction we were heading.

But we must have looked a little overwhelmed as we nodded in response, because she soon stopped and asked, "Do you speak English?" in perfect English. Wahoo! She said she was walking home and she lived on the way to the castle, so we should just follow her. We chatted as we went and she was very nice.

She asked where we were from and we told her we were Americans but living in the UK, and in Switzerland for Christmas markets. She said it must be interesting to experience how different places celebrate Christmas, and we must have noticed that the Swiss celebrate differently than the British. Um... sure! (We hadn't noticed, but I think we would have to actually celebrate with a Swiss family for that.)

She said Spiez is a popular lake resort in the summer but doesn't have much to see in the winter, and that unfortunately the castle is closed. We said we were mainly interested in the church next to it, and she said, "Oh yes, it is very nice. People use it for weddings." But she didn't know if it would be open. Fingers crossed!

When we came to her turnoff she pointed us in the right direction and said goodbye, and we found the castle very soon. It's not all that big, and more of a royal palace than a fortress, but it looked like it would be interesting inside. (There'll be more pics of the castle below.)

After walking through the gate beneath the castle, the church came into view. It was set right out at the end of the peninsula, overlooking the lake. No wonder it's used for weddings! 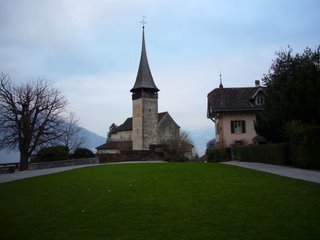 We tried the door and - hooray! - it opened.

Inside it was dark and atmospheric and wonderful. It took us a moment to find a switch for a light, then I headed straight up to the marvelous faded frescoes in the apse while David took a look around. I had no idea of their date, but I have since learned that the church dates from around 900-1000 AD and presumably they date from around the same time. That's old!

In the center was Jesus on a throne inside a round medallion, with saints and other figures around him. The barrel-vault in front of the apse had another enthroned Jesus with rows of saints.

The rest of the church interior was simple, with a small altar in the apse, a simple pulpit, and a modern organ.

Sadly the gate to the side chapel (above right) was locked and looked pretty impossible to climb over. This meant we couldn't access the entrance to the crypt, which has more frescoes. Darn. But I was still very happy and David thought the church was cool, too. And because it was so small, it didn't take us too long to photograph all of it.

On our way back from the church we explored the castle a little more, and took in some more views. 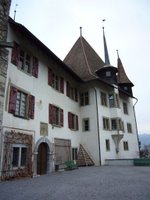 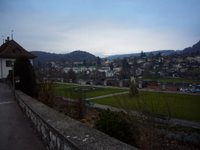 Then it was the long trudge back uphill to the train station, with a brief stop along the way to buy some gingerbread. I got a small star that said "You're my star" for immediate consumption.

There were wonderful giant gingerbreads everywhere in Switzerland, but unfortunately they would just be too much of a pain to try to take home. The car-shaped one in the window (right) has one of our favorite German phrases: Gute fahrt. It means "Have a good journey," but rarely fails to crack us up. The other one in the window, Frohe Weihnacht, means Merry Christmas.

Back at the station, we retrieved our bags, checked the departures, and immediately found a train heading towards Bern. We hustled to the platform and hopped on for less than 15 minutes to our next stop, Thun. The train was fairly full with work commuters, but we didn't mind standing up for such a short journey.

It was a really nice train, and a chatty young man who stood near us informed us that it was a German train that goes all the way to Hamburg every day. He seemed to be a local, but sounded proud that the train was German. He offered us a nice pocket rail map from his wallet, and insisted when we tried to refuse. There's just nice Swiss people everywhere, at least outside the big cities!