Posted on January 5, 2007 by Holly Hayes
Part of: December in Switzerland

Wednesday morning (December 20) in Murren began at a leisurely pace. We had some trouble dragging ourselves out of bed, but were rewarded with an immediate view of those gorgeous mountain peaks!

It was a beautifully clear day, for which we were infinitely grateful. We had a continental breakfast in the pub-restaurant downstairs, which was simple but adequate and even included warm croissants.

By the time we got packed up, it was already after 10:30. We checked out, and our hosts allowed us to leave our luggage in a designated area of the games room. They even put David's bag with the laptop in their office for extra security.

The main plan for the day was a trip up to the Schilthorn, a mountain peak at 9,700 feet (for comparison, the summit of Mt. Hood is 11,250 feet). A TV screen in the pub displayed a live webcam of the conditions at the top, which is a great thing - there wouldn't be much to see if it was shrouded in a cloud.

But it looked glorious and sunny, and so we set off on the snowy 20-minute walk to the cable car station. 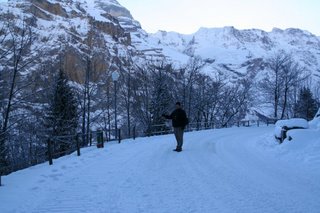 Despite the clear day, it was oddly dark in MÃ¼rren because of the surrounding high mountains. The sun doesn't really "come up" until around noon! So although the above photos were taken around 11am, it looks more like 6:30!

After buying our tickets we had about a 20 minute wait, but thankfully the cable car station (shown in a photo taken later) was large and warm. 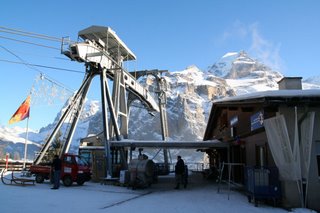 While we waited, we learned more about the Piz Gloria, the revolving restaurant at the top of the Schilthorn. It starred as Blofeld's lair that was blown up by James Bond in On Her Majesty's Secret Service (1969).

We rented the movie before our trip and it wasn't too bad, despite being the first one without Sean and the only one with George Lazenby. It's also the only movie in which Bond gets married.

The restaurant first opened to the public after filming was completed and retained the name Piz Gloria, which comes from the original On Her Majesty's Secret Service novel. So Bond got a great movie location and the new tourist attraction got funding and huge publicity - win-win!

The cable-car ride to the Schilthorn was even higher and scarier than the one that brought us to MÃ¼rren, but it was also so beautiful that I just had to enjoy the views despite the possibility we could plummet to our deaths at any moment. David made a pretty good argument that this wasn't actually much of a possibility, though. I mostly believed him. 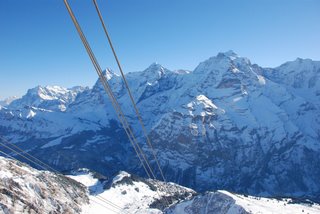 The ascent took maybe 20 minutes total and included two stages, first to the Birg (where many people got off to ski down, and we had to change cars) and then to the Schilthorn.

As we came into the Birg it looked like the car might run right into a rock face, but instead it somehow goes straight up the rock before coming to a gentle swinging stop at the station. 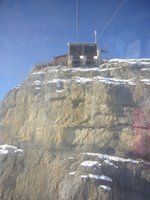 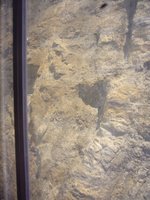 The Schilthorn peak is pretty small and all there is up there is the Piz Gloria, a gift shop, and a wonderful outdoor viewing terrace.

We started with a walk around the terrace to take in all the glorious views. I don't think I've ever seen such a dramatic and spectacular sight in my life, and being up there was possibly the most memorable experience of the trip for both of us. 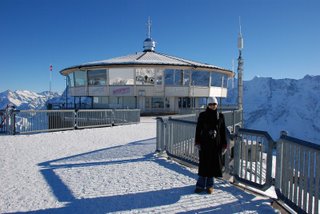 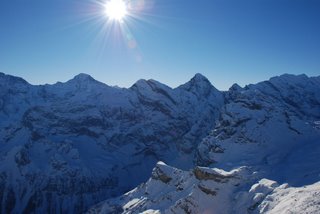 Then we headed into the restaurant for a leisurely lunch, which was so fun. Being on the Schilthorn itself was spectacular, but it was really a novel experience to watch a revolving view of sunshine on the Alps while enjoying delicious Swiss food. 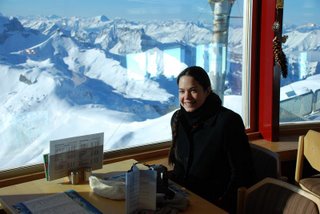 The restaurant rotates about once every hour and there were handy guides to mountain peaks in the windowsills. Being children at heart, this one especially caught our eye: 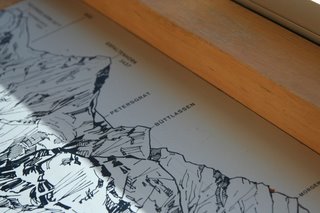 And they left all the 1960s decor in place, which gave it a wonderfully kitschy Bond feel.

We were too late for the James Bond Breakfast, which runs until 10:45. James Bond Spaghetti was still available, but David chose a pork schnitzel, for which he'd been searching ever since we arrived with little success. We now understand that it's mainly a German and Austrian thing and the Swiss aren't all into it. Probably because it doesn't involve cheese. 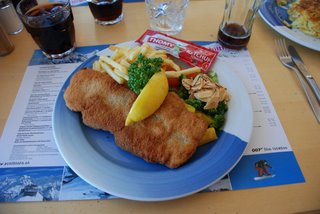 David said the schnitzel was okay, but he was understandably jealous of what I ordered! Fortunately there was plenty to share. It was called SpÃ¤tzlitraum, "SpÃ¤tzli delight." SpÃ¤tzli are mini cheese dumplings that have a wonderfully chewy consistency somewhere between gnocchi and cheese curd. This was mixed with bacon, roasted onions and big slices of pears. What a combination! It was so delicious. And it came served on a piece of a tree. 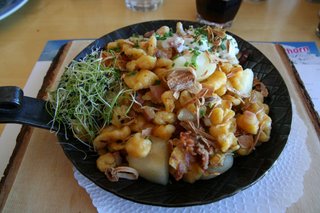 After lunch we explored the final indoor attraction, the delightfully named "Touristorama." It turned out to be a screening room underneath the outdoor terrace where you could watch clips of On Her Majesty's Secret Service. This wasn't immediately obvious, and we just enjoyed the view through the windows at first.

But then I discovered an intriguing button labeled "007." I pushed it, of course, and immediately motorized shades covered all the windows and the show began. It was like being entertained by Blofeld himself, showing off all his wonderful 1960s gadgets. We didn't stay long, but it was fun for a few minutes. 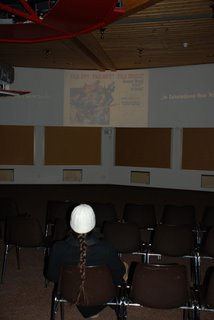 Then we braved the biting cold out on the terrace again for awhile to enjoy more views and take even more photos. I love this timer shot gone wrong: 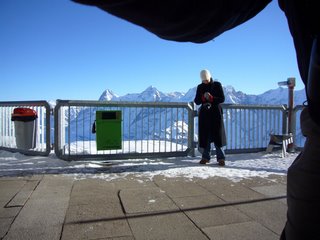 When I could no longer feel my fingers I left David to his photography and went into the gift shop.

I bought a couple small magnets, the only souvenir I semi-collect from our travels, and got a kick out of the fairly bad wall art featuring scenes from the Bond movie.

Then it was time to catch the cable car for the ride back down. 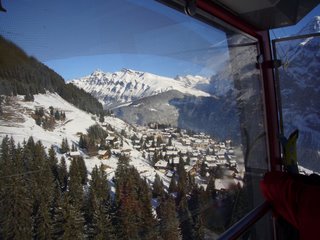 Safely back on the ground in MÃ¼rren, we took the higher of the two main roads back to our hotel to see more of the town. By now the sun was fully out and the snowy landscape was so beautiful against the blue sky. 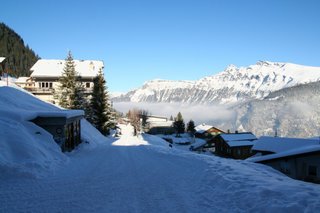 There wasn't a whole lot to see in the sleepy little town, but we did see two little churches (I peeked in one and kids were practicing for a Christmas concert - so cute), a friendly cat, men in flannel pounding in a post, and the rather ugly sports center with a big curling rink.

We picked up our luggage from the guesthouse, bought our tickets from the small MÃ¼rren train station, and were soon rattling along on the mountain train...

...and down the cable car back to Lauterbrunnen. 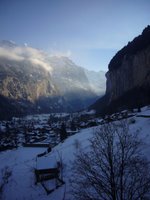 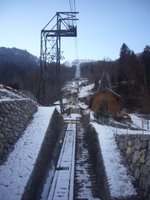 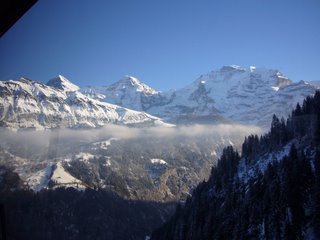 Our destination for the night was Bern, but we made two stops along the way. More on that next time...