Posted on January 3, 2007 by Holly Hayes
Part of: December in Switzerland

Tuesday was mainly a travel day, with about four hours' worth of train riding across central Switzerland from Einsiedeln to our night in the mountains at MÃ¼rren. But that was no bummer, since Swiss trains are wonderful!

And of course, we also got to see lots of pretty scenery from the window. We were almost always traveling alongside a lake, and they were all a lovely green-blue despite the gray weather.

No Lollygagging in Lucerne! 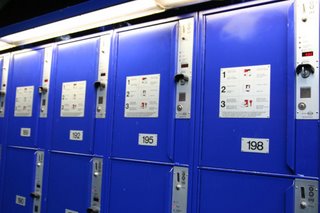 It wasn't long before we arrived at the first of four stations where we had to change trains, which was Luzern (Lucerne).

We had about 35 minutes before the next train, so we threw our bags in a train station locker (did we mention how much we love those??) and set out for a whirlwind tour of Lucerne.

Lucerne is the only Swiss city I have visited before, but all I remembered was that it was on a lake (Lake Lucerne, wouldn't you know it) and had a neat wooden bridge with a tower. I had not been on the bridge itself, though, and it was prettier than I remember.

I was more impressed with Lucerne this time in general - must be the company! From the station, we crossed a modern bridge over the lake, then walked down the wooden bridge (which stretches diagonally back across the lake). It was very picturesque and entertains walkers with triangular murals of battles along the way.

At the other end of the bridge was a big church, so I ran ahead and photographed the life out of it in about seven minutes while David lingered to take these pretty pictures before catching up:

The church was Jesuit Catholic and decorated in the pastel-heavy Baroque style that I don't love. It was pretty, but not terribly exciting. At least it's something to add to my website.

With 12 minutes to our train, we rushed back to the train station (below right). This thankfully involved only really fast walking - I get in trouble if I make David run.

We were starving by then, so I stood in line for sausages and bread from a stand while David got the bags out of the lockers, and we met at our platform with 4 minutes to spare! Whew. We are travel maniacs. 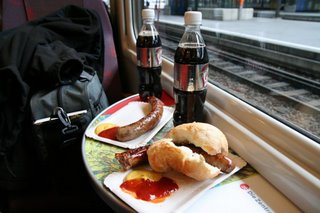 A Situation at Sarnen

Our next train change was at Sarnen, which was about 45 minutes or so from Lucerne. We found our train with no problem and were basking in the wonder of the timeliness and efficiency of Swiss train travel when we realized our train was not departing on time. In fact, it was not departing at all.

After maybe 10 minutes of sitting in the station, an announcement came on in German only. We did catch one word: "bus." Oh dear. We asked a cute elderly couple near us if they sprechen Englisch, but they didn't. I could almost form the necessary sentence "Is the train broken?" Ist die Zug...? but then I was stumped. I was pondering whether kaput is German or Yiddish when the kind woman managed to convey to us through gestures that the train was broken and that they would provide a bus for us instead.

So we followed everyone else to the station's bus stop and waited for about 10 minutes before our bus arrived. We all managed to cram onto one bus, but it was a very tight fit especially with all the luggage. We were squished pretty close to a young Asian couple and briefly spoke to an American couple nearby.

The bus ride was otherwise very smooth and pleasant, with no stops even for traffic lights that I can remember, and it was along a lovely lake.

The ride was longer than we expected and took us a full two towns down the track. So despite the setback we remained impressed with Swiss efficiency, and were making such good time that we figured we'd be back on schedule before we knew it.

Alas, however, it was not to be! Instead, we waited for 1 hour and 15 minutes outside the very small train station in the town of Giswil. By this time, we were at the very base of the Alps, evening was approaching, and we were absolutely freezing.

I'm sure I've been colder in my life (most likely during a winter visit to Minnesota), but it didn't seem likely at the time. We were also uptight because we wanted to see the Alpine scenery before dark, and the delay was making it seem less and less possible.

We passed the time by watching our fellow passengers, snapping some boring photos, chatting with a young couple from Florida who were really cold, and looking longingly down the track. Note the sloping track on the right - that's our route!

We also learned our German numbers from the occasional announcements over the loud speakers. Our train was first expected to arrive in 42 minutes, which seemed an unbearable eternity, but when that time came, they said another 15 minutes, and then another 15 minutes. Argh! We all could have kissed the train when it finally did arrive.

Everything went smoothly from there, and the scenery immediately got more mountainous. After we had warmed up, we spent most of the time sticking our cameras out an open window in the between-cars area of the train.

We changed trains again at Interlaken, a very touristy city that is the most popular base for the Swiss Alps. We didn't have enough time between trains to explore any of it, but it's easy to see why it's so popular - as its name indicates, it's picturesquely situated "between the lakes," and it's a major rail hub to go up into the Alps (or anywhere else).

We did have time for a cheeseburger and hot apple cider from a stand, though. The photo at right is back on the train - every Swiss train had a table-map like this that shows the current region. It was very cool.

After Interlaken the train really began to climb into the hills, and soon there was snow on the ground. With evening falling, the white scenery turned a beautiful cold blue, and we again watched it through an open window as long as the temperature would allow.

Our next change was at Lauterbrunnen, where we were now fully in the mountains. And here our "train" was now a cable car! From here on we had only a handful of fellow travelers, a young English couple and an American family with two small children who had flown all the way from the USA that day. Poor things.

I don't do well with heights and therefore don't do well with cable cars. I find it especially alarming when the car swings as it passes through a support tower. But I tried to be brave and even stood up to take some photos, and there was no doubt it was worth it! The scenery was absolutely spectacular.

After the very vertical cable car ride, all that remained was a short ride on a wonderfully horizontal little two-car mountain train. Everyone sat in one car, so we used the empty one to gaze at the spectacular scenery through open windows while letting a whole lot of cold air in. The British couple soon joined us.

We left both Lauterbrunnen and the clouds behind as we climbed higher and higher:

We arrived in MÃ¼rren at around 5-ish, when there was just a bit of light left. Our cameras make it look more light than it was, but despite the near darkness the scenery was still breathtaking.

MÃ¼rren's altitude is 5,400 feet and the village consists entirely of little wooden chalets. It is perched right on the edge of a cliff that drops 2,600 feet straight down to the valley floor. And directly across that valley are three spectacular Alpine peaks: from left, the Eiger (Ogre), MÃ¶nch (Monk), and Jungfrau (Maiden). They were absolutely beautiful. 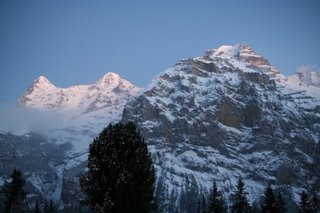 Our hotel was right across the street from the train station, or at least we thought it was. We tried to check in at the Hotel Eiger before realizing that we had actually booked at its annex - the Eiger Guesthouse, two doors down.

The Eiger Guesthouse is run by a very nice Swiss-Scottish couple and it even has a pub. No language barrier here!

It was much less fancy than the Hotel Eiger (where we saw people stepping out of an elevator in hotel bathrobes, coming from the sauna), but also much cheaper! Our room was basic but large, and this was the view from our window: 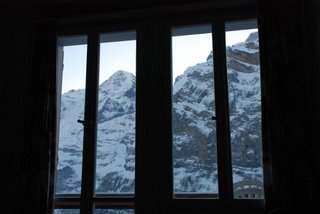 Incredible! After we had warmed up a bit, we headed out to explore the village and find dinner. Although dinner was available at our guesthouse's restaurant, we weren't into eating at a pub and our hosts gamely recommend another good place.

As the ski season had not yet started, MÃ¼rren was incredibly quiet. I don't think we saw more than two other people on our 10-minute walk down the main road to dinner! The low season, the high altitude and the heavy carpet of snow combined to make it almost completely silent up there. This is wonderful, but always takes some getting used to at first! We don't realize how noisy our everyday life is until we experience real quiet like this.

The recommended restaurant looked good to us, so we went for it. It was a small and warm little place called the StagerstÃ¼bli. (The second photo was obviously taken the next day.)

Everyone stared at us when we came in and we clearly were the only foreigners there at first. However, the waitress was friendly enough and the food was SO GOOD. We would have come back again if we were staying another night! We decided against the horse(!)... 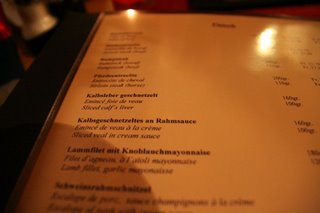 and opted for some more palatable Swiss specialties instead.

David had the veal in cream sauce and declared it was one of the best meals he'd ever had. It came with rÃ¶sti (pronounced "roesch-tee"), which is the main traditional Swiss dish and we'd been looking forward to trying it. Basically, it's hashbrowns that are usually baked with something on top, but they somehow make those hashbrowns extra delicious!

I had raclette, which is both a type of sharp Swiss cheese and the name of dishes made with it (Wikipedia can tell you all about it). It is basically melted cheese over toast, and I ordered mine with an egg. It was very rich but delicious.

After dinner David convinced me to brave the cold and walk another 10 minutes away from the hotel to check out the cable car station for the Schiltorn, which we'd be doing in the morning. Other than the blistering cold, it was a lovely walk. Still very, very quiet and the sky was full of bright stars. I attempted to photograph them, with little success.

Back at our guesthouse, we had dessert in the pub - warm apple tart for me and ice cream for David. Then it was off to bed for a good night's sleep after a long day of travel.