A Night in Einsiedeln

Posted on January 2, 2007 by Holly Hayes
Part of: December in Switzerland

Einsiedeln is a small town about 45 minutes by train from ZÃ¼rich. It's at a slightly higher altitude than ZÃ¼rich and there was a bit of leftover snow on the ground when we arrived in the early evening. 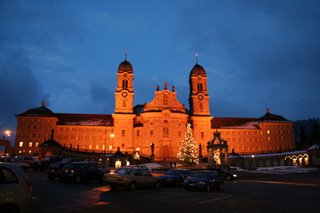 The town developed in the early Middle Ages around the Basilica of Our Lady of Einsiedeln, an important Catholic shrine that has a miracle-working statue of the Virgin Mary, and a chapel that is said to have been consecrated by Christ himself.

The shrine is the main reason we stopped for the night there - I write about lots of Catholic shrines for Sacred Destinations and was interested to see one for myself. I'd like to check out Lourdes one day, too. I also added Einsiedeln to our itinerary (with David's approval) because they have a good outdoor Christmas market right in the basilica square.

Alas, however, the first thing we noticed when we arrived was that there was no market to be seen! Our hotel clerk told us that it ended on December 10. How ridiculous is that? We were really disappointed, especially poor David who really couldn't care less about the shrine.

On the plus side, our hotel had a fabulous view of the basilica. I've never slept so close to the main landmark of a city before. We arrived at night, and this was our view when we opened the curtains: 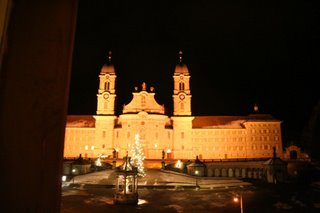 But other than that, our hotel room was none too impressive. It had the funniest brown 70s decor and the shower was placed inexplicably in the corner of the bedroom. Of course David had to step in right away to make sure he fit - just barely! It really cracked us up. I wish I had taken a photo of the bathroom walls, which were tiled in loud brown flowers.

We saw a few people going in and out of the basilica, so after we settled in we went over to check it out. It was really a different experience! The basilica is huge and decorated in the Baroque style - i.e. overdone with elaborate paintings and pastel decorations. But the lights were mostly off, except for construction workers building a stage at the front and a service at the Lady Chapel at the back. Being in a giant basilica in the near-dark was really different.

The Lady Chapel is a free-standing marble enclosure right near the entrance. It's where all the action is, because it's where the miraculous Black Madonna is kept. Photos are not allowed and she was always surrounded by devotees, so this pic is from the basilica's official website.

There are several "black madonnas" throughout Europe, and the usual explanation for their color is staining from centuries of candle smoke. However, at least some are black beneath their clothes too, and were probably carved from a dark wood or stone in the first place. Some New Agers and feminists have theories about these statues being a survival of a pagan "dark feminine" or something like that, but I haven't come across any such pagan tradition in my studies so far. In any case, it's an interesting phenomenon.

The basilica is actually part of a huge monastery, and there are services almost all day. When we came in, a service was being conducted in the Lady Chapel. Two monks or priests were officiating at an altar beneath the Black Madonna inside the chapel, while a couple dozen people, about equally men and women, watched from pews set just outside the chapel. The best I could do was a couple photos from behind the glass sliding door of the entrance foyer:

The worshipers at the service were very devout and it was clear to see just how much faith they all have in the power of the Madonna to help them with their problems. It also seemed to us that there was significant fear mixed in with the love for her - that if they didn't treat her right she just might bring the locusts! But of course, there's only so much you can tell about religion from outside observation. It was all very interesting. We stood quietly at the back and watched the service for a bit. The Madonna herself is very impressive - dressed in elaborate gold-embroidered robes, crowned, and mounted on a background of golden clouds.

After our basilica visit, we walked back into town to find dinner. It was very, very cold and the town was really quiet. Most of the shops were closed for the night (it was only about 5pm) and we only saw a few other people out on the sidewalks. Definitely not the place for nightlife!

We considered eating at the "Three Kings," which was not far from the basilica, but we ended up at the pizzeria whose sign you can see on the left in the photo. The waitress did not speak a lot of English but it wasn't difficult to order since most of it had familiar Italian food words! David got a meat dish that he didn't love, but I liked my pizza pretty well. We were mainly happy to be out of the cold! It was well below freezing by then.

After dinner we toured the town and there wasn't much to see, but we did find an open bakery where David bought me some gingerbread (which we finally learned is what lebkuchen means).

The ladies in the bakery were really nice but spoke absolutely no English. I practiced as much German as I could muster on them, which didn't take long! They had some really fun giant gingerbreads with the shape of the basilica imprinted on them, which were sadly too large to pack or to eat during our trip.

Next stop was a kitchen store, where we were the only customers and the clerks also spoke no English. It was all quite refreshing, actually! David bought a little folding knife and by means of a game of charades we communicated with the salesgirl that we would like to buy it, but that we couldn't figure out how to close it, that it needed some oil which she would put on for us, and that it wasn't a gift.

That last one was tricky. After we paid she asked Es ist schenken? and since it's difficult to act out the word "gift," mainly kept repeating the question in German while we looked dumbfounded. But finally it clicked in my brain that schenken meant "gift" - I had seen it on lots of advertisements for Christmas gifts in ZÃ¼rich. I was so pleased with myself. Boy, I have a long way to go in my German learning!

After that, we pretty much ran out of things to do in Einsiedeln and headed back to our hotel room to relax, read our Switzerland book, and plan for the next day. It was kind of a nice change from the fast pace of the cities, but we were both pretty bored and ready to move on.

The following morning, we had the included breakfast in our hotel's restaurant, which was fine but not terribly impressive. Then we went over to the basilica to get some daytime photos of the outside (sadly the sky was really grey so they aren't very pretty).

There was again a service in progress at the Lady Chapel, and there was no one in the main part of the basilica except for the stage construction workers. While I snapped photos of a couple side altars, David snapped the Baroque ceiling and the front altar in plain view of the workers.

The workers looked like they had no interest in enforcing the no-photography rule - until David took a picture of the Lady Chapel (just the back, from far away - the far right photo above). Then they came up immediately and asked him not to take photos. Interesting! No one wants the Madonna to get upset, it seems.

We checked out around 10:30 and made our way back to the train station (about a 15-minute walk straight down the main street). We bought our tickets and had some time before our train, so made our first use of the wonderful luggage lockers they have in all Swiss train stations and wandered across the street to a sports store. Einsiedeln is actually also a ski resort town, but we were there just before ski season really gets going.

I bought a thermal shirt, which I had been wanting ever since we arrived in Switzerland, and it was so wonderful to have for our journey into the Alps - which ended up being a far more complicated and colder experience than we expected! More on that next time.