Zurich in the Daylight

Posted on December 29, 2006 by Holly Hayes
Part of: December in Switzerland

Breakfast was included at our ZÃ¼rich hotel and it was really fun. They had not only the standard continental fare - croissants, bread, jam, cereal, coffee, juice - but also fresh eggs that you boiled yourself and fresh oranges to squeeze in a juicer yourself. We had a great time and it was delicious. 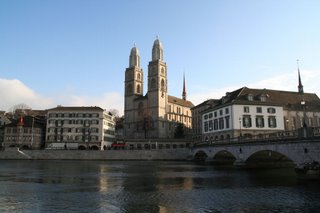 After breakfast we packed up, checked out, and left our bags with the front desk so we could go out exploring for the day. Our first stop was of course the GrossmÃ¼nster, which would be the cathedral of ZÃ¼rich if it wasn't Protestant.

As I mentioned in the last post, it has an interesting history. It was founded by Emperor Charlemagne when (according to legend) his horse suddenly knelt down over the graves of ZÃ¼rich's patron saints, the martyrs Felix and Regula. It was fun to follow in the footsteps of Charlemagne again, after visiting his wonderful imperial cathedral in Aachen this time last year.

Felix and Regula were Christians who were beheaded in 286 CE by the Romans. The saints then picked up their own heads and carried them up the hill to where the GrossmÃ¼nster stands today, dug their own graves, and interred themselves. Impressive! (The photo is a fresco in the GrossmÃ¼nster of Felix or Regula.)

Incidentally, St Denis, the patron saint of Paris, did the same thing after being beheaded near the hilltop site of the Sacre-Coeur Basilica.

So the GrossmÃ¼nster was very central to ZÃ¼rich's religious life throughout the Middle Ages, with imposing architecture, such an illustrious history, and the holy relics of the head-carrying martyrs. 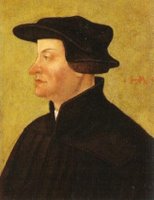 But in the 1500s, the GrossmÃ¼nster became famous across all of Europe thanks to a man who had no use for saints or relics â€” Huldrych Zwingli (1484-1531), a contemporary of Luther and one of the great leaders of the Reformation.

Preaching for 12 years from GrossmÃ¼nster's pulpit, Zwingli initiated the Reformation in Switzerland. ZÃ¼rich became a center of Protestant theology and students flocked to it from afar, including John Knox from Scotland, who later founded Presbyterianism.

Many of the great cities and cantons (Swiss provinces or counties) became Protestant, but some remained Catholic. This led to the Religious Wars, in which Zwingli was killed in battle. Today, Switzerland is still part Protestant and part Catholic.

We arrived about 10 minutes before it opened, and I happily passed the time examining the carved stone portal and bronze door depicting biblical stories.

They opened the doors immediately after the bells struck 10am - we love Swiss punctuality! It was nice to have it all to ourselves for a bit. The interior is pretty plain, because the former Catholic church was stripped of its idolatrous decorations at the Reformation.

However, there were still some old carved capitals and faded frescoes to enjoy and photograph. Both date from the original church built by Charlemagne. The frescoes were whitewashed during the Reformation, but have been uncovered in modern times.

There were more wonderful old frescoes on the ceiling of a downstairs side chapel:

And in the crypt was the original statue of Charlemagne that sat high on one of the towers (there's a replica up there now). It dates from about 1450.

After this quick look around, we headed up the tower before too many other people arrived. It was one of the better tower climbs, with a little more width in the spiral stairs and much more room at the top. Still lots of huffing and puffing all around, though! But the views from up there were so worth it! 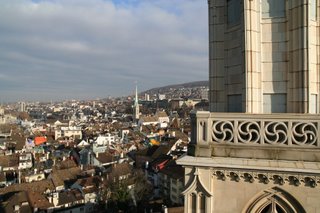 After the tower, the last stop was the cloister, dating from when the GrossmÃ¼nster was part of an abbey.

It wasn't beautiful in itself but had lots of fascinating Romanesque carvings. Very few had anything to do with religion, and some were stranger than others...

We did lots more walking after the GrossmÃ¼nster, and visited two more churches: the Fraumunster, known for its Marc Chagall windows, and St Peterskirche, which is pretty plain but has the largest clock face in Europe.

ZÃ¼rich's Old Town was just as lovely in the daytime as it had been the night before and we had a wonderful time exploring lots of alleys, squares, shops and fountains. It was very quiet - few shops were open and there were hardly people to be seen anywhere. Perfect! 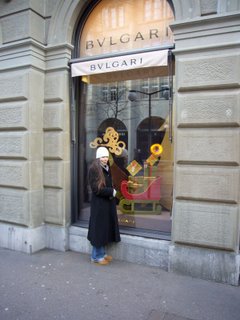 Things were much more bustling in the New Town, which has a fancy shopping street called the Bahnhofstrasse. Here it felt a lot like London and there was none of the quaint medieval atmosphere of the Old Town. We did lots of people-watching and window-shopping and I admired some giant diamonds in the window at Bulgari...

This area of the city provided a glimpse into what ZÃ¼rich is most known for - bankers and rich people. We passed lots of men in suits and lovely wool overcoats walking fast and talking on their cell phones.

Finally, having worn ourselves out with all the walking and nearly freezing our tails off, we headed back to our hotel to pick up our bags and made our way back to the huge train station. 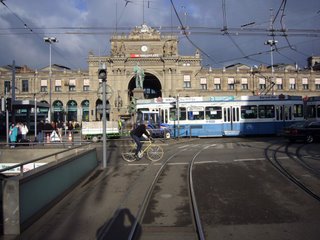 Next door to the station is the Schweizerisches Landesmuseum, the Swiss National Museum, which is housed in a beautiful 19th-century castle/mansion. We thought if it was cheap we'd go in, and amazingly it was. But it was also closed for the day. So we contented ourselves with a glimpse of the lobby and a tour of the outside, which included an ice rink and party tents set amongst the atmospheric old buildings.

At the station, we took another tour around the Christmas market and discovered an entire shopping mall on the lower level.

We got a kick out of this giant banner hung high on a wall in the train station:

We are both big fans of George, who just cracks us up. One of the fun things about living abroad is that we get to see all the commercials that American movie stars do only in Europe. It's a nice way for them to make some easy extra money without any damage to their image back home. There is a TV commercial to go with this banner, which we see all the time at home and also saw on Swiss TV with German subtitles. Thanks to YouTube, you can watch it here (with French subtitles).

He also did one for Fiat that plays only in Italy and is set at his Lake Como house (see it here). I bet he made millions for what is probably a single day's work. Heck of a deal! In fairness to George, he has taken little to no pay for his last few arty/political movies (*Syriana, Good Night and Good Luck, The Good German), so could probably use the money to tide him over until Oceans Thirteen*!

How was that for a tangent? Anyhoo, sometime around 3:30 we hopped on a nice double-decker train headed for our next destination, Einsiedeln.