Posted on December 27, 2006 by Holly Hayes
Part of: December in Switzerland

Our trip to Switzerland for the pre-holidays (Dec. 17-23) was wonderful and very festive. It was mighty cold - below freezing the entire time - but it never snowed. That was okay, though, as we had some blue-sky days in the cities and we still got to enjoy the snow during our day in the Alps.

Thanks to good old Heathrow Airport our trip didn't begin very smoothly, although it could have been much worse.

Fortunately we avoided the major fog problem that you may have heard about; instead, the baggage belts broke. We stood in the so-called "Fast Bag Drop" line (we had checked-in online) for two hours before the problem was announced and they canceled check-ins altogether.

Suitcases piled up on the belts behind the check-in desks. The time for boarding our flight came and went. Most people missed their flights, and those who didn't had to fly without their baggage. They were told it might be forwarded to them tomorrow, but probably the next day.

We cursed the fact that we had decided to check in bags this time, which lately we have been trying not to do. If it weren't for the stupid new hand luggage limitations, our small suitcases and shoulder bags could have been carried on.

At least by that point we had made it to near the front of the line and were able to talk with the clerks who had nothing to do anyway. They recommended that we leave the check-in line and go rebook another flight before everyone else realized they needed to do the same thing. This was excellent advice for which we were very grateful!

We were helped pretty quickly at the British Airways ticket counter, but all remaining flights to Zurich that day were full. Instead we got on one for Basel, which is about an hour by train from Zurich. Fine by us! We were so grateful to make it to Switzerland at all. I would have accepted a flight to Paris or Berlin or wherever and ridden the train for hours, just as long as we didn't have to go home and eat the cost of our reserved hotel in Zurich. So this was our revised route (in red): 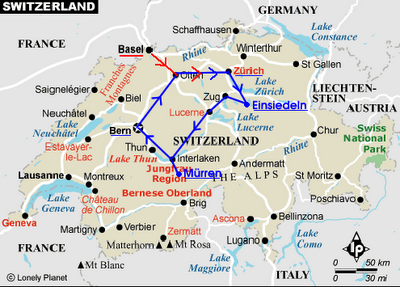 We had a little over two hours before our new flight, so we took the shuttle bus back out to our car (thank goodness we drove Wilma - we had thought about the bus), where we repacked so that we had only carry-on luggage. That was difficult since we'd already packed pretty light, but it was a good exercise in taking only what we really need! Thankfully we had verified with a security agent that our huge cameras would not count as extra luggage if we wore them - we would have been in real trouble if we had to pack those as well! 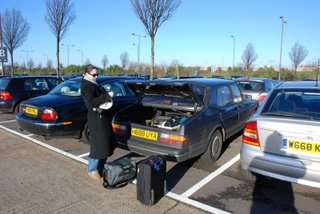 Back at the airport, the chaos had reached new levels. People were being made to wait outside in the cold to prevent congestion in the airport. We attempted to check in online using David's laptop and then on one of the self-check in kiosks, but neither worked because we had changed our flight. The lines for the check-in desks were still extremely long, so we really weren't sure we'd be able to make our flight after all. 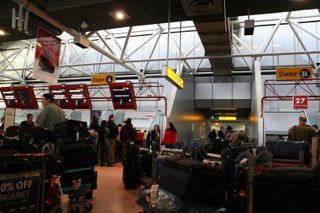 But thankfully, after waiting in line at the BA Customer Service desk for a good 30 minutes (while I waited with the luggage and took this photo), David was able to talk to a wonderfully nice and helpful agent who managed to get us boarding passes. Phew! Things were sure quiet at the security checkpoint and although our departure gate was changed at the last minute, everything went smoothly from there.

It was very interesting to arrive in Basel, since the city is right at the top corner where France, Germany and Switzerland meet. In fact, the airport is in France, and then a bus takes you into the city of Basel, Switzerland, within about 15 minutes. As you can see in the photo, we could also have chosen France or Germany just by taking a different exit! 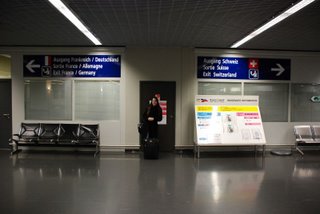 Before getting on the train for Zurich we had a very brief look around Basel, which looked like a nice city. It has a big cathedral so I had thoughts... but we were ready to get to our hotel in Zurich. We ogled the goodies at a couple Christmas-market stands outside the station...

...and bought some gorgeous Swiss chocolates from a shop in the station that was like heaven!

Train stations in Switzerland are so much different than just about everywhere else in the world - they are actually pleasant places to be! According to our guidebook, they often even have nice restaurants where locals go out for dinner.

So we passed the time easily until our train about 45 minutes later. For the train journey we got a delicious pretzel and drinks. David's beer is Feldschlossen, which seems to be the main Swiss beer and he said was very good.

We arrived at Zurich's train station around 6 or 7pm and immediately got to enjoy their huge Christmas market, since it's right there in the station!

There were lots of wonderful things for sale - mostly homemade arts and crafts that were really high quality and quite unique. I can see this would be a fabulous place for Christmas shopping.

I especially fell in love with these star-shaped paper lanterns, but didn't feel like buying anything, nor figuring out how to get them home. I ended up seeing them at Christmas markets in other cities as well. 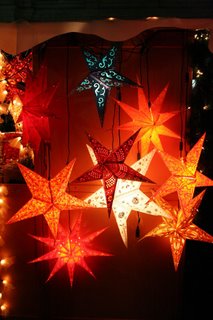 David's parents especially would have liked the Swarovski tree, fully decorated with their crystal ornaments. It was very impressive. 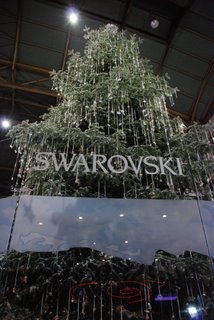 Then we walked across the river and for about 15 minutes to our hotel. Zurich was different than I'd expected, especially in the Old Town - much more cobbled and quaint than I would have thought for the largest city in Switzerland (but it still only has 365,000 people).

Our hotel was great, quite modern, had interesting decor - and we shared our room with Sophia Loren!

After dropping off our bags, we headed back out almost immediately to explore and look for dinner. Strolling Zurich's Old Town at night turned out to be one of the best experiences of the trip. They had Christmas lights hung over the cobblestoned alleys, which were the loveliest I've ever seen. The lights were very tasteful, made of almost all white bulbs dangling in rows, and were absolutely magical! Not a blue snowflake or flashing red reindeer in sight. 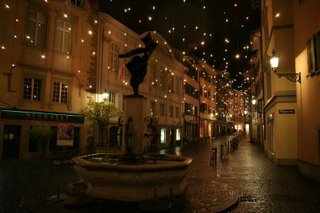 Zurich's main landmark, the Grossmunster (Great Minster, a.k.a. Cathedral), was closer to our hotel than we'd thought and it was a nice surprise to see it when we emerged from an alley. It's huge of course, but also different in architecture than any other European cathedral. And it has played an interesting role in the religious history of Zurich - but more on that tomorrow, when we actually visit the inside - and climb the tower!

We took some photos of it and of the other main church across the river (the Fraumunster, with a tall spire), experimenting with various railings and surfaces to substitute for the tripod we had left behind with our "extra" luggage during the repacking.

The streets were very quiet, but we were joined in our photography endeavors by a young Asian couple. We also enjoyed looking in the windows of all the restaurants and shops in the Old Town, which included a look at some cranberries from Oregon and some bunnies!

Then off to dinner. On our walk we had been excited to see another Mexican restaurant! Quite the luck to find Mexican food again so soon after our delicious experience in Amsterdam. Since most other restaurants near our hotel were Italian, we felt no pressure to eat "Swiss food" right away and happily went for the Mexican.

Unfortunately, it wasn't nearly as good as the Amsterdam restaurant. I had a spinach quesadilla and David had an assorted platter and it was still Mexican and still good, but very overpriced (even for Switzerland). On the positive side, the atmosphere was nice and the menus were printed on giant wooden fish.

After dinner we did some more walking around in the city, returning to the Grossmunster, then crossing the river and coming back on another bridge before returning to our hotel and crashing after our long and adventurous day.