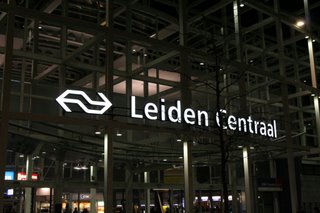 On Saturday, we squeezed in a day trip out of Amsterdam to Leiden. We wanted to see another part of the Netherlands than just Amsterdam, and it turned out to be one of the nicest experiences of the trip. 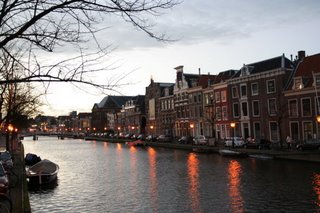 Both Haarlem and Leiden make easy day trips and David left it up to me; I chose Leiden because I knew it has a few old churches and some Pilgrim history, but mainly we went to wander around. It was just a 20 minute train ride from Amsterdam (about 15 miles southwest).

We only spent a few hours in Leiden - it was really more of an evening trip than a day trip - but it was beautiful and such a nice time. We both absolutely loved it, and thought it was far more attractive and pleasant than Amsterdam. 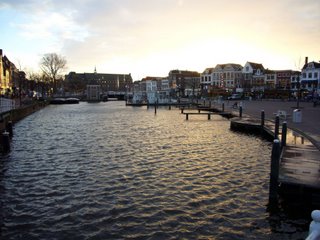 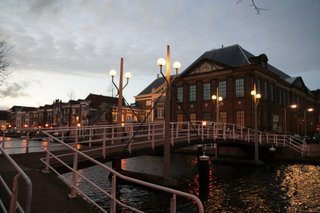 Like Amsterdam, Leiden has many canals lined with lovely houses. But it also has an old wooden windmill! Inside, they've preserved the miller's quarters and have a little museum (we didn't have time for that). 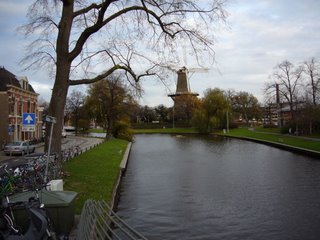 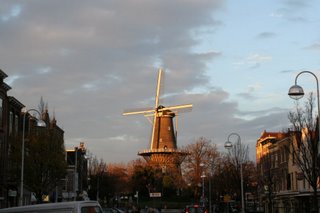 Our walk took us through a canalside market, at which we bought some delicious treats called siropkoeken (syrup cookies). They were little cookie sandwiches filled with some kind of caramel or honey, which was not too sweet and not too sticky. Just right.

The city itself was quiet, clean, relaxed and beautiful. It was a nice change from the hectic craziness of Amsterdam. The houses we walked past were almost universally attractive on the outside, and inside most of them looked like they were designed entirely by Pottery Barn! Bee-yootiful. And expensive, I imagine. 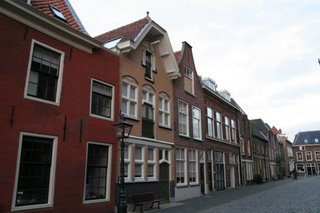 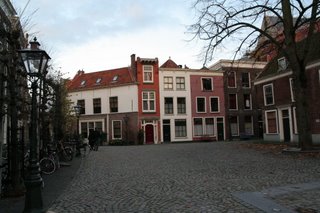 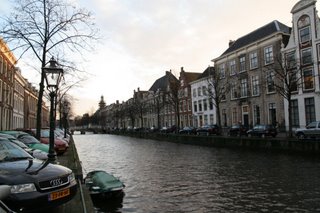 There were a variety of interesting shops, including a cheese shop and a Muji-esque home shop:

One of the coolest features of Leiden was the poetry and quotations that show up painted on buildings throughout the city! Each of the poems are in a different language (the English one is on the top left). I thought it was such a nice touch to bring some life and interest to ordinary houses and buildings.

Leiden's main churches were interesting but not too spectacular (and all closed). The top one is the main church, the Pieterskerk, but it was mostly covered in scaffolding.

The one sight I was really sorry not to have been able to explore was the National Museum of Antiquities, which has an excellent collection of Egyptian and Greco-Roman artifacts (my favorite!). It was closing in 15 minutes when we got there.

Fortunately, we did arrive just in time to be able to see its main exhibit, which is displayed for free just inside the entrance. This is the Taffeh Temple, which was a gift from Egypt to the Netherlands for all the good Dutch archaeological work in the area. 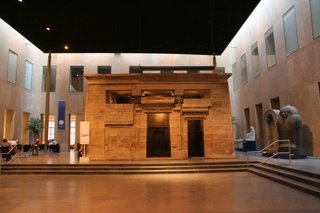 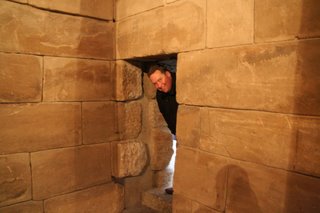 It was originally dedicated to the Egyptian goddess Isis, then converted into a Christian church in the 4th century CE.

And finally, before hopping back on the train for Amsterdam, we found another fantastic ethnic dinner - Chinese, this time. The food was outstanding and the service was excellent. We had two young waitresses, both of which were sweet as could be and spoke perfect English - and Dutch, and Chinese. Of course. 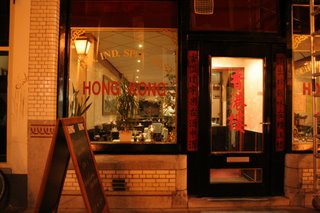 We had tea, shrimp bread, and some unique main dishes. David had a chicken dish with oyster sauce, which the waitress poured on a sizzling platter just before serving. I had chicken and mango with rice! It was so, so good.

Then it was a very cold walk back to the wonderfully modern and efficient train station, where we rode in the upper level of a double-decker train as we had on the way in.