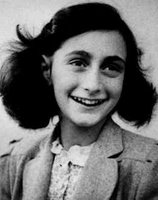 One of the coolest sights in Amsterdam is the Anne Frank House, where the famous young girl lived in hiding and wrote her diary during the Nazi occupation.

My guidebook says it's the most popular attraction in the city and I believe it - even in the middle of winter, there was about a 15-minute wait in line.

It has been a long time since I've read Anne Frank's Diary, but the museum posted relevant quotes from it in the various rooms, in both Dutch and English. Left is a photo of the one with the most impact, which led to a room that described the fates of the Franks and other Dutch Jews in the concentration camps.

Seeing the "secret annex" in person really made the Franks' experiences come to life, and I found it very interesting. Heartbreaking, too, especially since Anne was so cute and full of life - she wrote so well for her age (13-15) and she dreamed of being a professional writer, or perhaps a film star.

Anne Frank and her family were from Germany, but they moved to Amsterdam when Hitler assumed power in Germany in 1933 (Anne was then 4 years old). They lived normal lives there for nearly a decade - Otto Frank ran a business that sold fruit pectin and Anne and her quieter sister Margot did very well in school. (Right photo: identity card of Otto Frank displayed in the museum.)

The Franks were Reform Jews, meaning that they valued their Jewish identity and kept some major traditions but were not all that religious. Anne and Margot had schoolfriends from a variety of faiths. Otto Frank was scholarly-minded and Anne records that he sat on his bed every day and read Charles Dickens with the help of a dictionary.

But in 1942, Nazi occupation spread to the Netherlands. After Anne's mother Edith received an order to relocate to a work camp, the family went into hiding. The family moved from their apartment across town to a "secret annex" above Otto's company offices on July 6, 1942.

They could not be seen carrying luggage and Jews were not allowed to use public transportation, so they walked the 1-2 miles wearing several layers of clothing. Poor Anne even had to leave her cat behind - and she didn't even have someone to e-mail her photos of it like I do.

Eight people lived in a few rooms totaling 500 square feet: Otto and Edith Frank and their daughters Anne and Margot, and the family of Otto's business partner, Hermann van Pels. Four employees of the company knew about the hiding place and helped provide the families with food, news and supplies.

The people in hiding had to be absolutely silent during the day - including no running water - so that the other employees of the warehouse would not hear them. A false bookcase covered the entrance to the annex (right).

Anne Frank wrote in her diary from June 12, 1942 (the notebook was a present for her 13th birthday) until August 1, 1944. The walls of the secret annex still have the heights of the growing Frank sisters marked in pencil (left), and the map on which Otto tracked the progress of the Allies during the war.

In an attempt to make her room more cheerful, Anne decorated the walls with posters and photos of movie stars and royalty, including the young English princesses Elizabeth and Margaret (below). It has been left exactly as it was, with only a protective plexiglass layer laid over the top.

I found that the most moving sight of all - such a normal thing for a young girl to do, but this poor girl could never go outside and didn't even live to see her 16th birthday.

On the morning of August 4, 1944, the hiding place was stormed by the Nazis. The hiders had been betrayed by an informer whose identity is still not known. The Franks were shipped to a holding prison in the Netherlands, and eventually to the Bergen-Belsen concentration camp. Anne died of typhus just weeks before the camp was liberated by the Allies in early 1945.

Otto Frank, who had been sent to Auschwitz, was the only one of the eight hiders in the annex to survive. He returned to find the hiding place exactly as they had left it, although plundered of anything valuable. One of the helpers, Miep Gies, had collected Anne's diary papers for safekeeping, and she gave them to Otto once it became clear that Anne was not coming back. He said his reaction upon reading the diary was, "I never knew my little Anne was so deep."

Based in part on Anne's written wish to be a published author, Otto Frank decided to publish the diary. It has since been translated into many languages and was read by Nelson Mandela in prison, and just about everyone in high school.

The house was opened as a museum in 1960. It includes the secret annex, the offices and warehouses of Otto's company, and some adjacent rooms purchased for exhibition space. The museum is really good, combining the preserved rooms with short videos on the Nazi occupation and the war, and a major display on the diary itself and its impact. One of the neatest sights of all was the original handwritten diary of Anne Frank, displayed under glass (photos were even more prohibited there, so I didn't try it).

Another major Jewish sight in Amsterdam is the Jewish Museum, which is housed in a complex of four synagogues dating from the 17th and 18th centuries. We visited it in part for my websites and in part for a nice change from the usual churches. It was quite interesting. 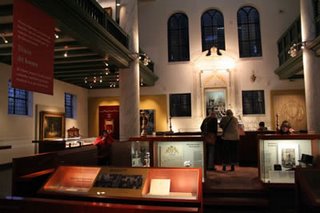 Amsterdam had a large Jewish community because the Netherlands were more tolerant than most European countries in the later Middle Ages. The first group of Jews arrived after 1492 from Spain and Portugal during the Inquisition. These are known as the Sephardic Jews, and most were fairly wealthy because of their trade contacts and skills they had cultivated in the previously tolerant Spain.

In the 17th century, the Ashkenazi Jews began to arrive in Amsterdam, fleeing the pogroms in Central and Eastern Europe. These were much poorer than their Sephardic brethren, and the two communities remained generally separate. The museum is housed in the Ashkenazi synagogues, while the nearby Sephardic "Portuguese Synagogue" (right photo; unfortunately closed for the day) remains in active use as a synagogue.

The Jewish Museum had various displays on Jewish life in Amsterdam, religious and domestic, business and recreational. The most interesting part was the restored Great Synagogue, which was furnished like a synagogue and housed exhibits on Jewish ritual objects like circumcision kits, marriage certificates, Torah scrolls, Hanukkah menorahs, etc.

Another interesting sight was a Jewish portrait who we both immediately thought looked like a cross between Seinfeld and Kramer: 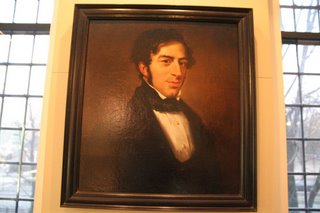 There was also a special temporary exhibition, which added 2 Euros to the admission price, called "the Jewish Rembrandt." The Dutch artist Rembrandt lived in Amsterdam for years and painted portraits of many of his Jewish neighbors, and used their features for his paintings of Jewish biblical figures like Jesus and his disciples.

There is apparently something of a scholarly controversy as to whether he may have had strong Jewish sympathies or, conversely, that many of his portraits previously believed to be Jews actually are not.

It was mildly interesting, and I especially like Rembrandt's painting of Moses (right), which I believe was on loan from the Queen of England's personal collection.