Unlike most European cities, Amsterdam does not have a great cathedral or an impressive array of churches. This in part because the city officially adopted Calvinism soon after the Reformation in 1578, and Calvinists are not fans of fancy religious art or architecture.

So after the Reformation, Amsterdam's existing churches were stripped down to their bare essentials, and those built later are quite plain and utilitarian. Bottom line: Amsterdam's churches aren't all that exciting to look at. Well, except to me - I like 'em all!

Below are the simple but attractive Westerkerk (West Church) and Zuidekerk (South Church), both built after the Reformation.

Both of these are no longer used as churches and were closed for the entire winter! Godless country. Also closed was the Nieuwe Kerk (New Church, pictured front and back below), which is on the main city square and is from the 15th century. Note that houses have been built right up against it on the back - this was an interesting common theme among Amsterdam's churches.

The best church in Amsterdam that was actually open was the Oudekerk (Old Church), which was right in the heart of the Red Light District. If you enlarge the left photo below, you can just see a few red-light windows on the left. It was really quite depressing to have legalized prostitution right next to a beautiful old church, which no one uses anymore.

Inside, the Oudekerk was quite interesting, although it was certainly stripped down the way the Calvinists like it. It had a grand organ, a painted wooden ceiling, nice stained glass windows, Protestant elements like box pews, and an intriguing spiral stairway.

After 1578, Catholics lost all their churches yet remained fairly free, which was not the case in most other Protestant countries. However, tolerance had its limits - Catholics were prohibited by law from worshiping openly. This led to a really interesting phenomenon, the Catholic "hidden churches." There used to be over a dozen of these in Amsterdam, but now there's just a few.

The most famous one dates from the 17th century and is located smack in the middle of the Red Light District. Although it's quite seedy now, this was once the richest part of Amsterdam, and its canal houses are still the most impressive. This hidden church is called Ons' Lieve Heer op Solder, or "Church of Our Lord in the Attic." As you can see, it doesn't look much like a church from the outside! In 1661, a rich Catholic merchant named Jan Hartman bought this large canal house and built a Catholic church right into the top three floors. He lived with his family on the other levels (there's something like seven floors total). It served as the main parish church for Catholics in the city center for over 200 years. And as a bonus, Jan sure didn't have far to go on a Sunday morning! The church itself was really cool, and quite cleverly shoehorned into the available space of the narrow canal house. The rest of the house (now a museum) was also interesting, since it provided an opportunity to explore a furnished 17th-century house back when the Red Light District was the posh place to be. There were cozy living spaces, box beds, a kitchen, and very steep stairs.

Our Lord in Attic ceased to be used in 1887, when new laws allowed Catholics to build a huge parish church a few blocks away, the St Nicolaaskerk.

It has big domes, a grand facade, a large altar, stained glass windows, and all the other great stuff there wasn't room for back in the hidden church. Conveniently located right next to the main train station, it is still an active Catholic church and also hosts lots of concerts.

It wasn't terribly exciting inside, but the altar (above right) does feature the crown of the Hapsburg Emperor Maximilian, who came to Amsterdam as a pilgrim in the 15th century and stayed on to recover from an illness.

Another notable hidden Catholic church from those Reformation years is in the Begijnhof (Beguines' Court). This was founded in the 14th century as a community for the Beguines, Catholic women who lived like nuns but without vows and could return to regular life if they wished. Until the Reformation, the Beguines used a small church in the center of their snug little ring of houses. But in 1607, this was taken from them and given to Amsterdam's English Reformed community. The central church became known as the Engelse Kerk, and I believe it is still active. There was a wedding going on when we visited, so we couldn't go inside. It was also extraordinarily difficult to photograph because of its height and the enclosed courtyard. 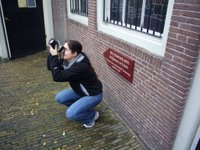 So after the Protestants moved in, the Beguines built a hidden church in a house right across from the church. (The entrance sign is behind me in the above photo.) This one was wide and short in contrast to the tall and narrow Our Lord in the Attic, and quite lovely.

The paintings and stained glass windows depicted the lives of the Beguines as well as the usual biblical stories. The painting below shows the Begijnhof and the church they had to give up to the Protestants.

More photos of these and other sights can be seen here on my Flickr page.