We had such fun exploring Amsterdam for David's birthday trip. It is quite a beautiful city, especially with all the canals and the lovely houses that line them. Neither of us realized just how many canals there are - it nearly rivals Venice! 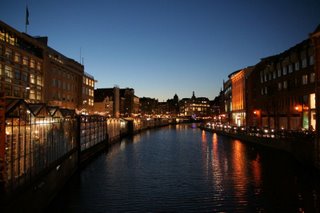 The canal houses of Amsterdam are almost universally picturesque - tall and thin and squashed together in a variety of harmonious colors, shapes and sizes. 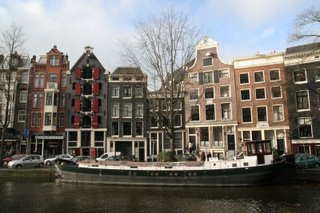 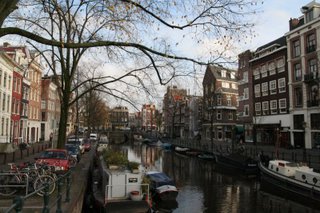 And this traditional architecture is combined with more ultra-modern architecture than we've seen in any other European city so far. Below is an interesting office building that was one of our first sights when we got off the train from the airport. I'm not necessarily a huge fan of modern art, but what a wonderful thing it is when the architects of a new office building actually pay attention to form as well as function, and try to add something attractive (or at least interesting) to the cityscape. (An excellent example in London: the fabulous new Gherkin skyscraper.) 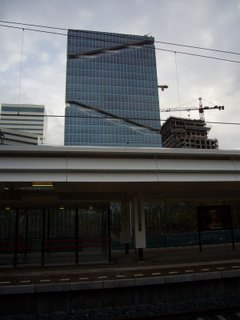 Another notable feature of Amsterdam (and the Netherlands in general): bicycles. I thought Oxford was big on biking, but it doesn't even compare to what the Dutch have going on. 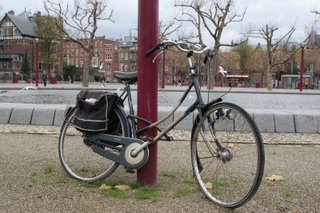 It seems that nearly as many people get around on bikes as get around in cars in Amsterdam, and it's no wonder - they have a wonderful system of bike paths throughout the city. Instead of the marked bike lane in most cities, which is still too close for comfort to traffic, Amsterdam's bicyclists get a wide, two-way, designated path on the sidewalk! In the photo below, the part of the sidewalk with the posts is for pedestrians, while the slightly lowered part on the right is for bikes. 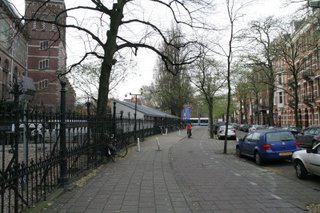 This system is not immediately obvious to the tourist and it takes some getting used to that you must always stand on the correct part of the sidewalk. Coupled with the fact that Amsterdam's bicycle commuters are complete maniacs and their bikes are remarkably quiet, we were in far more danger of being hit by a bike than a car as we walked around! But I'm happy to report there were no incidents.