Posted on November 15, 2006 by Holly Hayes
Part of: Graduate School in Oxford

On our way back home from Weymouth on Sunday, we stopped at Cerne Abbas, a village in the county of Dorset with a population of just over 700. It's delightful. But it's best known for the giant chalk drawing on a hillside just outside of town, known as the Cerne Abbas Giant or "Rude Man." You can probably guess how he got his nickname.

Like the Uffington White Horse that we visited about a year ago, this figure was drawn by cutting into the white chalk layer of the hill. But unlike the very abstract and elegant horse, the Cerne Abbas Giant is almost comical - and no one has any idea when it was made. No artifacts have been found at the site that can provide any kind of date.

Because of his most prominent feature, he has usually been assumed to be a Celtic fertility symbol. Iron age settlements have been discovered on the same hill, so it certainly could date from this period. Local lore has long had it that young maidens who sleep within his "prominent feature" will soon get married, and couples who copulate there will soon be pregnant. But if he's a fertility god, what's with the club?

Because of his club and his nakedness, one of the most popular theories of the Giant is that he is the Greco-Roman hero Hercules. If so, it might have been drawn around 180 AD during the reign of Commodus (you might remember him as the psycho from Gladiator), who fancied himself an incarnation of Hercules and encouraged the worship of the hero throughout the empire. But classical depictions of Hercules don't accentuate his nakedness quite like this!

Another theory even has it that it was drawn by the monks of the nearby Cerne Abbey, to make fun of an abbot! This would explain why such a "Rude Man" was allowed to survive so close to a Christian monastery.

But the problem with all these theories is that the Giant is not mentioned in any historical record until 1694, when the churchward of Cerne Abbas's parish church recorded spending 3 shillings on "repairing ye giant." And what's really interesting is that about a hundred years later, a guy claimed he was told that the Giant was drawn in the late 1600s by the owner of the hill to make fun of Oliver Cromwell! This actually makes sense, because Cromwell was nicknamed the "English Hercules" and he was known for his stern, puritanical rule. If the Giant was intended to be funny, this would also account for his small head and goofy face.

So it remains quite an intriguing mystery. They've provided a nice viewpoint and parking area along the highway to see the Giant, and there's a public footpath that goes up the hill alongside him. He's now fenced off by the National Trust, to prevent erosion and damage. We had a really pleasant walk along the footpath and up to the Giant, and there were tremendous views of the Dorset countryside from the top.

From there, we followed another footpath into the village to do more exploring. We walked through a field in which two guys seemed to be doing archaeological surveys of the ground, through an old cemetery, and then to the few remains of Cerne Abbey.

The abbey was founded in 987 when there was nothing here, and the village of Cerne Abbas gradually grew up around it. The abbey was really large and wealthy throughout the Middle Ages, but then met the same fate as the rest of England's monasteries in Henry VIII's Dissolution (1539).

Today, all that remains is the abbey barn, abbey guesthouse, and the very interesting Abbot's Hall (pictured below), which was built in 1519. They are all on private property, and people still live in the Abbey House (below left), which incorporates part of the abbey's gatehouse. The owner allows visitors to tromp around his backyard at his discretion, and fortunately for us the gate was open.


Then we headed into the village, which was quiet and peaceful and filled with lovely old stone cottages and warm-looking pubs. Outside one of the pubs was a man who seemed to be living the village life to the fullest, with a pint of cider, sturdy wellies, and two beautiful dogs.

As you might expect, many of the places in the village were named for their famous tourist attractions - we saw The Giant Pub and Giant's Interiors. But it was not a very touristy village at all, I'm happy to say.

And of course, we had to explore the village church, which was built around 1300. It was provided by the monks (who were plenty wealthy by that time) for the villagers, most of whom worked for the abbey.

The church's most interesting feature were some very old but very faded murals, which used to depict scenes from the life of John the Baptist (below) and the Annunciation. There were also some unique painted shields with bible verses, which were added in the post-Reformation 1600s. And in the back were some interesting displays on the history of the village and the Giant.


Then we and our weary legs headed back for the car, but not before we visited St. Augustine's Well, a sacred well that has various legends and superstitions associated with it. It was quite lovely with all the fall leaves, and looked like a peaceful place to contemplate life. It was also a fun place to experiment with picture-taking, and David went to impressive lengths for his art. 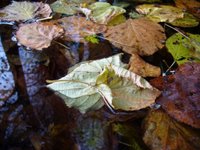 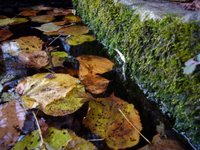 By around 3:00, we were back at the car and on our way home. It seemed like quite a long drive (more so for David, I'm sure!), but was only a couple of hours. At least there were some interesting things to see along the freeway...