Posted on November 14, 2006 by Holly Hayes
Part of: Graduate School in Oxford

Weymouth is on a little peninsula on the southern coast of England (i.e. on the English Channel part of the Atlantic). We chose Weymouth because one of David's co-workers recommended it as the best beach in the area and it's pretty handy from Oxford, but it also turned out to be a wonderfully historic place to celebrate Remembrance Day.

On our way from Glastonbury to Sherborne, I had called a B&B in Weymouth and booked a room for the night. It's called the Windsor Hotel and is right on the beach. The room was clean, newly decorated, and just fine, but the decor was really bad! The color theme was this bright shade of salmon or hot pink that would just about keep you up at night, and pasted on the wall by the bathroom were three plastic hot-pink fish. It cracked us up. Unfortunately I forgot to take any photos.

After checking in, we went out for a nighttime walk along the boardwalk and through town. The boardwalk and beach were pretty cool and even reminded us of Nice (but not nearly as fancy). There are lots of amusement parlors, games rooms, and rides like at Seaside, Oregon.

The boardwalk would have been much prettier if they'd had the Christmas lights on - they were all hung but turned off. We decided that Remembrance Day (the following day) was probably the UK parallel to Thanksgiving - after which is the official start to "Christmastime." We haven't had a chance to check that hypothesis yet, not being in town after dark. (Christmas stuff has been in the shops since before Halloween!)

In addition to its long beach, Weymouth has a harbor that looks nice at night and had lots of interesting boats to check out.

The town itself was far less impressive, with an uglified high street and crowds of drunk people everywhere, mainly teenagers. We had semi-planned on a drink and dessert to cap off the night, but didn't find any place that looked too exciting, so we just bought a couple Pepsi Maxes from a convenience store and headed back to our room to crash. Thanks to all the walking I fell asleep much earlier than usual - by midnight.

Sunday morning, David got up before me. He went out for a walk on the beach, and watched the sun rise from the ocean, which made him really happy. I'm glad he took his camera, as it looks like it was pretty spectacular! The photo on the left was taken just outside our B&B, which is in the photo on the right. 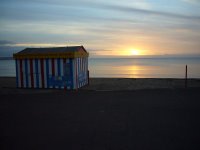 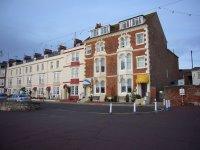 We had our included full English breakfast at the B&B, which was fine but not spectacular. I went for the vegetarian sausage, which the owner said was the Linda McCartney variety. It was a little weird but pretty good, and went well with the beans. It seems I've gotten used to the strange British habit of eating baked beans for breakfast.

After breakfast we went for a daytime walk down the boardwalk to the pier, where a large ferry was docked and people were doing some fishing. The ocean and city were really lovely, as were the hills that surrounded the inlet at Weymouth. There were even some nice white cliffs - which I had assumed (for no good reason) were only visible at Dover. We also saw some swimmers! Swimming in the English Channel in November with no wet suits - now that's impressive. 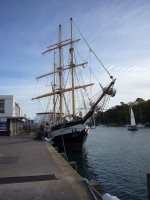 By the time we got back to the main street along the boardwalk, the Remembrance Day service had begun. Remembrance Day is, of course, the British Veteran's Day, and it is a very big holiday. People have been wearing their poppies for a good month leading up to it, and I believe this was the celebration that led to those flyovers at Buckingham Palace that we saw all the way in Oxford last year.

The service was quite moving, and it was really something to celebrate Remembrance Day next to the English Channel in Weymouth, which was the major embarkation port for the invasion of Normandy. Weymouth was also badly damaged by German air raids. The service included two minutes of silence, a prayer for soldiers and for peace, a hymn, two cannon shots, and the laying of poppy-wreaths on a cenotaph dedicated to lost British soldiers. 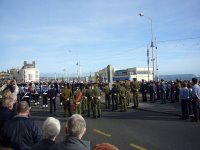 The second part of the service, which we didn't stay for since the laying of wreaths took a really long time, was further down the road at the cenotaph dedicated to fallen American soldiers (below, right). It's nice that our guys get honored in Weymouth, too!

We left Weymouth around noon and headed back the way we came to Cerne Abbas, a really fun and interesting village with lots to explore. More on that tomorrow!