Posted on November 13, 2006 by Holly Hayes
Part of: Graduate School in Oxford 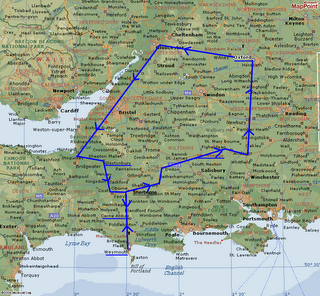 Since Wilma (that's our old Saab for any new readers) is now running very well thanks to all of David's recent work, we decided to take a longish trip south for the weekend.

We did a lot of walking, driving and sightseeing, and had a wonderful time. On the right is one of my rudimentary maps showing our route and main stops.

On Saturday we toured Glastonbury Abbey and its quirky, New-Agey town; walked around the pretty Dorset town of Sherborne at dusk; then went for a night walk along the pier in Weymouth, where we stayed the night at a B&B.

Sunday we celebrated Remembrance Day (British Veteran's Day) at a really nice outdoor service in Weymouth, then went hiking and exploring in Cerne Abbas - a wonderful village that has a chalk drawing on a hillside, abbey ruins, and an old church - before heading home.

We have visited Glastonbury once before, when we climbed the terraced hill called Glastonbury Tor, which is just outside of town. We had also planned to visit Glastonbury Abbey, but we spent too long at the Tor and it was closed when we arrived. Very disappointing. The photo on the left was taken that time - it was all we got to see of the abbey.

So this time we headed straight for it, but initially ran into another snag. It just so happened that we arrived on the day of the Glastonbury Carnival, during which 100,000 people come to the small town for a parade and such. So the big parking lot next to the abbey was reserved for people going to the carnival, and all the streets were going to be closed at 4pm. Fortunately, however, we found a spot just outside of town and were able to visit the abbey and leave by about 3:00 before being trapped.

Glastonbury is one interesting place. It had a sacred well in ancient times, and it was once of the first places in England to convert to Christianity. The ancient Celtic people who lived here believed the Tor (pictured on the right) was the gateway to the underworld, and they probably carved the terraces in the hillside as some kind of ritual labyrinth.

There are many legends associated with Glastonbury, most of which have to do with the Holy Grail, King Arthur, or both. Many people (including scholars) believe that Glastonbury is the "Isle of Avalon" mentioned in the King Arthur legends. Glastonbury is certainly not an island, which would seem to discredit this idea. But interestingly, 2000 years ago it was surrounded by water! 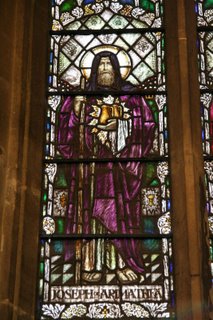 According to the legend of the Holy Grail, Joseph of Arimathea brought to Glastonbury after the Crucifixion. Joseph is mentioned in the Bible as the wealthy man who donated his tomb for the burial of Jesus, but legend adds to this that he kept the chalice used by Jesus at the Last Supper and caught his blood in it during the Crucifixion. One version has it that Joseph was then imprisoned for 12 years, during which time he was sustained by the Grail.

So why in the world would this guy from Jerusalem come all the way to England? Apparently, he was a wealthy merchant who mined lead in the Mendip mountains in the area. This is actually within the realm of possibility, as people did travel that far on the Roman roads back then. In fact, local legend says that Joseph brought the young Jesus to his lands here in Glastonbury (the Bible doesn't say anything about what Jesus did between the ages of 12 and 30). So, after the Crucifixion, Joseph sailed to England and landed at Glastonbury Tor, where he buried the Holy Grail somewhere nearby. He lived the rest of his life at Glastonbury, and was buried under the abbey church (so the legend goes).

Even putting the legends aside, Glastonbury Abbey is on a very old Christian site. The first church was built on the site by missionaries in the 100s CE - very early for so far away from Jerusalem! It was made of branches stuck together with mud.

The church and abbey were expanded by the Saxons and Normans, and by the Middle Ages it was very large and very wealthy. The abbey church was absolutely huge - longer than most cathedrals! The nice museum near the ruins included a reconstruction of the abbey, and it really must have been impressive. 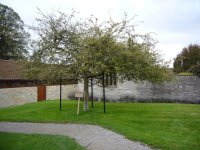 Just outside the museum was a descendant of the sacred Glastonbury Thorn, which is said to have sprouted when Joseph of Arimathea placed his staff in the ground.

There isn't a whole lot left of the abbey now, thanks to King Henry VIII and the Reformation, but there was still plenty to explore. The ruins of the abbey that we visited date from around 1200. Either because of the carnival or the weather, we had the place almost to ourselves - it was fantastic. The man at the ticket booth almost jumped when we came in, and he was so nice.

The main thing that you can see today is the Lady Chapel, which was at the west end of the main church. It stands on the site of the aforementioned original wooden church.

The Lady Chapel has a very nice carved portal, and a large crypt underneath. A drawing on a sign in the chapel gives an idea of what it used to look like - very elaborately decorated and colorful. It was great to check it all out all by ourselves. 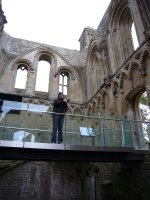 The other main sight of interest is the site of King Arthur's tomb in the nave of the abbey church. In 1191, the monks of Glastonbury Abbey discovered a Celtic grave, and near it was a lead cross with a Latin inscription that read, "Here in the Isle of Avalon lies buried the renowned King Arthur, with Guinevere, his second wife."

In 1278, the discovered remains were moved to a shrine in the great abbey church with a great ceremony attended by King Edward I (who was very interested in King Arthur). Many believe this really was the tomb of King Arthur, but skeptics point out that "discovery" of relics was a surefire way to attract pilgrims - and money - in the Middle Ages, and it was suspiciously convenient.

In any case, the tomb was completely destroyed in the 16th century by Protestants who regarded the veneration of relics as idolatry. The cross with the inscription has been lost, too. Now there's just a simple sign that marks where King Arthur - or somebody - was buried.

Remaining parts of the church where Arthur was buried include two impressive pillars where the transept was, and one large wall.

The abbey building that was the most intact was the very interesting Abbot's Kitchen. When Glastonbury Abbey was really wealthy, the abbot really lived large. He was a powerful landowner and did not live a very austere, monk-like life. While his monks had their simple meals of grain, he often feasted on large portions of meat flavored with fancy spices. His kitchen was also used for those few days each year when monks got to eat a nice meal for a religious festival. It was big enough to roast several whole oxen at at time!

The rest of the ruins are some small parts of the large church and foundations of monastery buildings like cloisters, and the latrine (right photos) - a pretty clever setup that uses the stream to wash sewage away and underground. 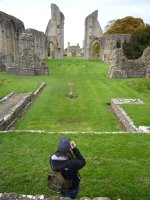 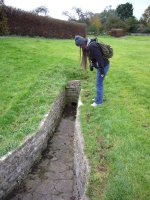 After the abbey, we wandered around the town of Glastonbury for a bit. Because of its ancient Celtic pagan importance, Glastonbury is a magnet for New Agers and Neopagans. Almost every shop in the city caters to this interest, selling crystals, herbs, candles, books on Wicca, chakras and meditation, and figurines from a variety of ancient religions. Exploring these quirky shops was actually one of the most interesting things we did on our trip. 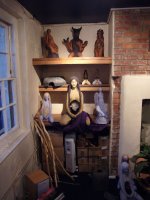 We also took a quick peek into Glastonbury's parish church, which was lovely and warmly lit. It had some stained glass windows featuring the legends of Joseph of Arimathea (the picture of him at the top of the blog was taken there) and a cozy cafe.