An Afternoon at Magdalen College

Posted on October 4, 2006 by Holly Hayes
Part of: Graduate School in Oxford

We had a beautiful sunny day yesterday, so I thought I'd get away from the computer for once and take my camera for a walk around town. I had a pretty good time and a nice walk, but as always, the blue sky went away before I got to take very many photos! Argh. I went ahead and took some pictures of the University Parks and Magdalene College anyway, so here's a few of 'em.

Then onto to Magdalene, one of my favorite colleges. I like it partly because C.S. Lewis taught there and partly because it's lovely. But yesterday I discovered things about it I hadn't noticed before, primarily in the way of funny medieval carvings.

First of all, I had never noticed there were misericords in the chapel before, and boy was I missing out!

That one on the left is easily the most interesting one I've ever seen, and I've seen quite a few! Don't ask me what he's doing - or how - but the fact that it's in a chapel is hilarious. That's the beauty of misericords: they weren't generally seen by the public since they're under the choir seats, so the medieval craftsmen just went to town.

I also discovered that the cloisters are lined with whimsical sculptures of all kinds of creatures and characters.

I wondered if any of these critters inspired the delightful talking animals and creatures in the Chronicles of Narnia, since the author would have seen them regularly. Here's where he worked: And out back, still on the college property, is a deer park! 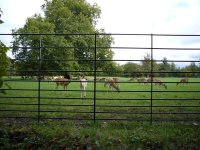 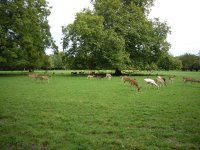 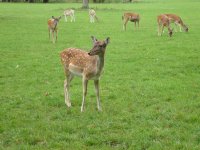 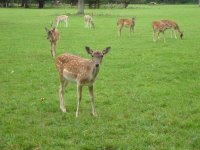 Well, at least we have a duck pond at Wolfson. Okay, back to work!