An Anniversary Walk Along the Thames Path

Posted on September 21, 2006 by Holly Hayes
Part of: Graduate School in Oxford September 18th was our second wedding anniversary! How time flies. A few days before that was our one-year anniversary of living in the UK, which is also hard to believe. We celebrated both occasions on Sunday the 17th, with a three-hour afternoon walk along the Thames Path followed by an excellent pub dinner in Oxford. It was so much fun and we got to see a new side of the city. It was the perfect way to celebrate.

Our walk began and ended near the Trout Inn, which you know from previous blog posts. There's a free public parking lot near there - a rare find in Oxford! It was a beautiful day - warm and sunny with a nice breeze - and perfect for a walk. 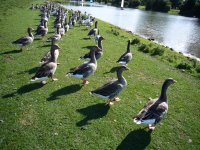 The Thames River runs along the west side of Oxford and eventually meanders into the city by Christ Church. We started at the north side of the city, followed the river south to the city center, then turned around and came back up the other side of the river. There are excellent paths the entire way - in fact, the entire way to London! The abundance of public footpaths is one of the things I really love about the UK.

Most of our walk was through Port Meadow, a huge grassy meadow full of cows, horses, ponies, and geese. We walked along the river most of the time, but took a detour to walk among the livestock. We got nuzzled by some friendly horses and stared at by cows of many colors. Across the meadow we could see trains go by (the tracks run parallel to the river, right next to the city) and the spires of Oxford's colleges in the distance. 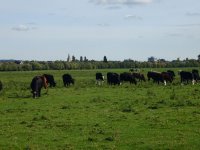 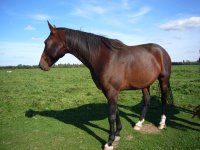 The path then narrowed and took us into the woods, where the river was still and peaceful and sunlight filtered through the trees. 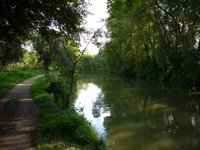 It was beautiful. We really must rent a canoe or punt sometime soon.

Finally we arrived at the western outskirts of the city near the train station. We checked out lots of canal boats, which some people actually live on. They were like the Oxford version of travel trailers - many of them were in lovely condition and used by retirees. 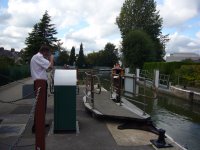 At the "Osney Locks" we watched the process of letting canal boats through a set of locks. The gruff, pipe-smoking lock operator appeared quite unfriendly, but David soon won him over with his interested questions about how it all worked.

Then it was back up the way we came, except on the other side of the river. 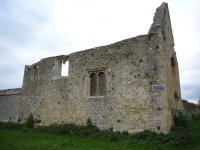 As we neared our starting point in Port Meadow we came upon a lovely little ruin, the Godstow nunnery. I don't know anything about it, but it was quite large. All that remains are the outer walls and a roofless stone building in the corner.

And finally, our well-earned anniversary dinner at the Trout! Shortly after we sat down at our outside table under an umbrella, it began to pour down rain. It was great, as it was nice and cool and added to ambience and the very British experience of the whole day. During dinner we were visited by both a duck and a peacock. 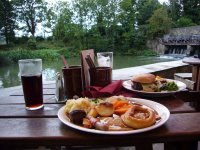 I had a delicious Sunday roast, complete with Yorkshire pudding and all the trimmings, and David had a bacon cheeseburger. For dessert we had hot fudge brownies, which are possibly the best I've had anywhere.

For our actual anniversary on Monday, we just had a nice dinner at home and David picked me some lovely roses from near our apartment. It was a really good anniversary, and it has been a really good two years together and one year in Oxford.