Posted on August 23, 2006 by Holly Hayes
Part of: Graduate School in Oxford

Sunday, on our way home from Durham - well, it was actually pretty far out of the way - we stopped at Whitby, a historic fishing village on the North Sea coast. The drive to get there was quite calm and beautiful, and took us through the North York Moors, a national park known for its rugged, heather-covered hills. The quaint building in the second photo below is of public toilets at a rest area along the highway! 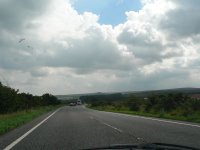 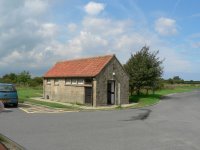 Whitby was great and a big hit with everyone. It has red-roofed stone houses perched on hills that overlook an inlet full of fishing boats. And up on the hill is an abbey ruin and an interesting parish church. It was even sunny and warm, with almost no wind, which was really strange for the coast. The weather did turn really grey later, but it still wasn't cold and I got all my abbey and church pictures in the sunshine! 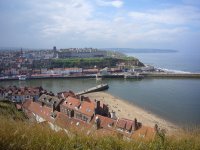 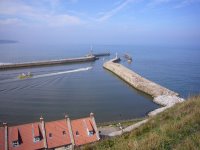 Whitby also has all sorts of interesting associations: Captian James Cook lived there for 4 years as a sailing apprentice and Bram Stoker lived there for some time as well. Many Whitby landmarks, such as the parish church, were incorporated into Dracula.

Whitby Abbey was the site of an important church council way back in the 600s, when the local leaders decided to adopt Roman Catholic Christianity instead of Celtic Christianity. It was originally ruled by a Saxon princess named St. Hild and was very rich and important throughout the Middle Ages. Like the others we've visited in England, it met its demise under King Henry VIII's "Dissolution of the Monasteries" in the 16th century. 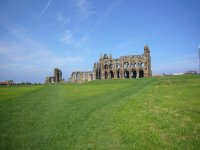 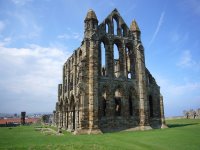 Next to the abbey ruins is the still-active Parish Church of St. Mary, which is one of the more unique churches I've seen. It has an odd shape to it, and has just one squat, castle-like tower on the end.

Inside are box pews with comfy-looking interiors, an upper loft with more seats, a charcoal stove in the middle, and a pulpit hung with ear trumpets for a 19th-century minister's wife who was hard of hearing. 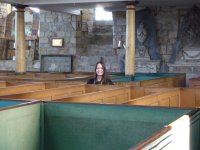 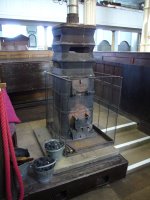 Next to the abbey is a partially-restored stately home from the 18th century (I think), which now has a small museum and abbey gift shop inside. Clearly, we had a lot of fun in there.

To get from the hill down into the town, you go down 199 historic steps. They are a landmark in themselves, and provide quite a nice view of the town. We felt every 199 of them on our way back up!

The town was really crowded with people, and between all the seafood restaurants, quirky gift shops and arcade games, we all thought it was "like Seaside only quainter." We walked out to the pier at David's request, where we watched some Morris dancers (the traditional dancers we saw in Oxford in May) and saw all different kinds of boats go in and out of the harbor. David went down a ladder to the lower level of the pier, where he chatted with some fisherman about their technique and took pictures of us up above. 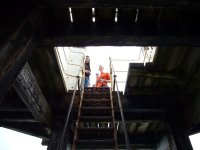 Then the long drive home. We arrived home late Sunday night - around 10:00, I think. We stopped for dinner at the Oriental Condor near the train station in Oxford, picked up their luggage from our place, got Carol and William checked back in at the University Club, then headed home. Everyone was very ready for bed, especially our weary driver!