Weald and Downland, Chichester and Winchester

Posted on August 14, 2006 by Holly Hayes
Part of: Graduate School in Oxford 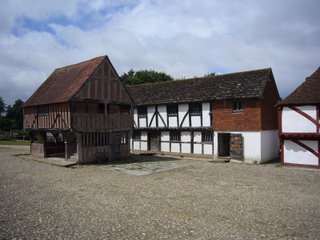 We hadn't done any local sightseeing for awhile, mainly because it has been so hot. But the weather has really turned and it is actually cold most of the time lately! Strange. So yesterday we decided to go on a driving day trip south of Oxford. 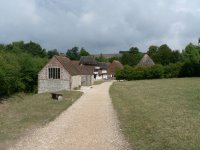 The main motivation for the trip was the Weald and Downland Open Air Museum, which is in the middle of the countryside not far from the coast. David had discovered that this museum's gift shop was the main (or only) retailer in the UK of his favorite Swedish handmade axes and hatchets, so he was excited to go check them out.

Of course we don't have much need for axes and hatchets in our college accommodations, but David collects them like he does well-made knives, just to look at and enjoy and eventually use when we have a real house. We already have an axe and a splitting maul from this Swedish company back at home (the splitting maul is mine!). For some reason, this Swedish company's products are much cheaper in the UK than in the USA.

So we simply had to go, and the fact that there was a museum attached to the gift shop made it all the more justifiable. And I was quick to discover that our driving route would take us past two cathedrals*! The drive was pleasant but rainy, and happily the museum gift shop had lots of hatchets in stock.

After careful examination and consideration, David bought two and put them in the trunk. One of them was a "French trade axe" that apparently is like the ones the French traded with Native Americans. It looks like a tomahawk and was presumably influenced by the Indian designs. So David bought a Swedish-made, French-Indian axe in England. 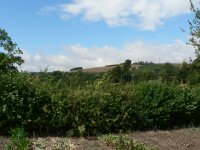 The place was interesting to me as well, and it gave me happy feelings of being back in Oregon. The area was surrounded by beautiful countryside and the gift shop smelled of wood and spices. Oxford isn't exactly a big city, but it felt good for my soul to be back in the country!

The open-air museum itself was interesting. It covers 50 acres and includes a working farm with livestock and flour mill. It consists of medieval and Victorian buildings that have been moved from their original locations nearby and reconstructed there, including a tollhouse, a schoolhouse, several cottages, and a market hall.

The market hall was especially interesting, and you could go upstairs to the second level, where we took this timer photo. The top floor was used for council meetings, and the bottom for markets. Under the stairs was a lock-up area for criminals. An upper floor of another building had a small chapel, which was decorated with beautiful flowers and bows for a wedding.

The Victorian cottages had been reconstructed as though people lived there, complete with boots by the door, a ticking clock, a bar of soap next to the kitchen sink, and a sewing machine in the middle of a project. 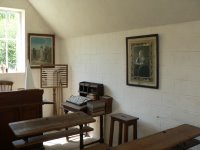 The schoolhouse was neat as well: it was very small and the date on the chalkboard said 1895. There was an abacus in the corner and two pictures on the wall: one of Jesus and one of Queen Victoria. It had a nice Little House on the Prairie feel to it (aside from the portrait of the Queen, of course).

After exploring a few buildings, we had a quick lunch at the Museum Cafe next to the pond. David had a tuna sandwich on a homemade roll and I had a hot bacon roll (an unfortunate British addition to the list of unhealthy foods I enjoy). Since it was also a bakery, we couldn't resist getting sweets too: I had bread pudding and David had a lemon drizzle cake. We ate outside at a picnic bench until it started raining. 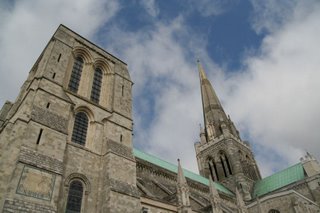 It was around 1:30 when we hopped back in the car and headed for Chichester, which was only about 6 miles south of the open-air museum. Chichester is a small market town and Chichester Cathedral is smallish compared to some. It was completed in 1108 so is mostly Norman in style, but the tall spire was added in the late 1800s. My guidebook says the spire can be seen from the ocean.

Chichester Cathedral was pleasant and still impressive despite its comparatively smallish size. We arrived as the choir was practicing for Evensong (held at 3:30 on Sundays), and their voices were beautiful. There was the smell of incense in the air, presumably from an earlier service, and the combination of beautiful sights, sounds and smells was really something.

The cathedral itself is notable for its mixture of modern art with ancient art, which I thought was done well. The modern art was very colorful and abstract but not ridiculously abstract or ugly like it often is, and it included a nice Marc Chagall window (right).

Outside there are large cloisters, delightful gargoyles (including one with glasses), and a huge old bell tower that stands separate from the building.

Then we moved onto Winchester, which was northwest along the road back home. We took a small country road and it was a peaceful, scenic drive. Winchester is a fairly small town but it was once a major city that ranked alongside London. William the Conquerer was crowned both at London and at Winchester, and it was monks from Winchester who were commissioned by William to prepare the Domesday Book. 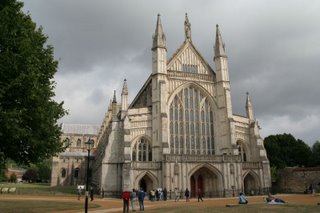 Winchester Cathedral (above) was built when the city was big and important, so it is very large and very impressive. It is the longest medieval church in Europe. Our guidebook warned us that the exterior is not too attractive, and we kept joking about the phrasing of their description: it "crouches stumpily over the tidy lawns of the Cathedral Close." I liked the exterior, though. It's not elegant but it's impressive and different.

The cathedral was really beautiful inside, and huge. As at Chichester, there were a few modern-art touches here and there. 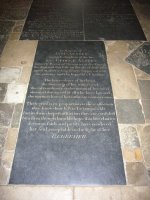 Highlights include the tomb and memorial of Jane Austen, who lived not far from Winchester; wooden chests containing the bones of pre-Norman kings like Knut and William Rufus; a Norman (1100s) baptismal font carved out of a beautiful black stone; a huge stone-carved screen with lots of sculptures of saints and kings; and several huge chantry chapels - those fancy tombs of bishops and knights with an effigy and surrounded by a delicately-carved stone wall. 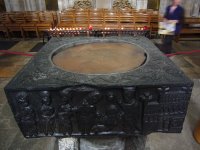 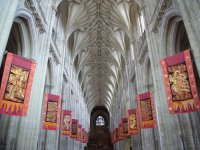 Part of The Da Vinci Code movie was filmed at Winchester Cathedral (as a stand-in for Westminster Abbey), and they've preserved some of the set that was used and have a temporary exhibit related to the book/movie. It mainly consisted of nicely illustrated information boards, but it was interesting.

It was nicely moderate about the issues, with comments like "Leonardo might have chosen to paint Mary Magdalene into The Last Supper, but he wouldn't have left one of the disciples out" and an explanation about why John often appears feminine in art (it's because he was thought to have written the Gospel of John, which was written quite late, so he would have to be young when he was with Jesus).

While wandering around we were approached by a friendly old man who was a volunteer guide to the cathedral, asking if we had any questions. He was enthusiastic and friendly, and showed us some graffiti on the wall that was carved in 1608 by an 18-year-old choir boy who went on to play the organ at St. Paul's Cathedral.

One unique part of the cathedral was the small crypt, which is often flooded due to the marshy land on which it was built. In the early 1900s, an impressive guy spent five years diving to the bottom of what must have been nasty water to gradually replace the wooden foundations with concrete.

Upstairs in the cathedral there is a small statue of him with his diving helmet and a plaque that says he "saved this cathedral with his own hands." The crypt was dry when we were there, but it has a modern statue by a British sculptor that was made to stand in a few inches of water (see this photo from the cathedral's website).

After the cathedral, we briefly wandered around the Winchester's streets before heading home. It seems like a nice town, and based on the street signs it looks like it has a castle and a museum, too. It was about an hour's drive home from Winchester, and we were very tuckered out when we got home. But we had cameras full of photos and heads full of nice memories, which is what's most important!