Posted on May 1, 2006 by Holly Hayes
Part of: Graduate School in Oxford

Saturday we went for another driving day trip. This time we headed to Somerset, south of Bath to Wells and Glastonbury.

The drive there was quite pleasant until we encountered terrible traffic in Bath. After crawling into town at about 5 mph and then taking 15 minutes to go around a single roundabout, we had to stop for a bathroom break. The honor went to the Bath Cricket Club, where we also watched a cricket game for a little bit.

Then it was onto Wells, our main destination for the day. Wells is a small city that is named for the natural wells that provide a year-round supply of fresh water. It has a huge and wonderful cathedral, which I'd learned about while researching for my website, as well as a bishop's palace complete with a moat.

We stopped at the bishop's palace first, as it had quite an inviting castle-like gateway. The moat was really neat, and the whole thing was very castle-like. Sadly, the inside was closed for the day due to a wedding. But we looked in the courtyard and hung around near the entrance for a bit, watching guests arrive in their wonderful British hats and nice clothes.

The man working at the gate asked where we were from, and looked surprised when David said Portland. It turns out he had lived in Florence (Oregon) for 10 years and went to the University of Oregon! He married an American around that time, whom it turns out we had passed playing the harp on the lawn outside the palace. A few weeks ago, they moved into a room above the gate to the bishop's palace! Nice.

We had a nice chat, and he brightened up even more when he heard I was studying ancient Christianity. He told us all about why he thinks the legends connecting Joseph of Arimathea and the Grail with Glastonbury are plausible. The best part of all is that he gave us his phone number and said that when we come back to Wells to see the bishop's palace, he'll have us over for tea and show us the parts of the palace the public doesn't get to see! Wahoo!

Then we headed to Wells Cathedral, which was built 1180-1239. It is unique in that it has an exceptionally wide west front that is covered with "one of the largest galleries of medieval sculpture in the world." It has rather squat towers with no spires, which is also unique. 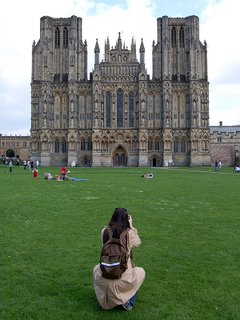 From bottom to top, the sculptures are of biblical scenes, kings, bishops, angels, the 12 apostles, and Christ. The guy holding the "X" is St. Andrew, the very first of the 12 disciples and brother of Peter, who tradition says was martyred by crucifixion on an X-shaped cross. He is patron saint of the city of Wells and of the cathedral. On either side of Christ are angels - doesn't it look like they're wearing bananas? 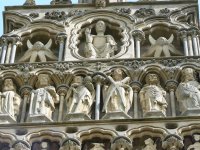 But the main draw is the interior, where the whole thing is held up by "scissor arches," an architectural feature found nowhere else. It's easy to see how they got their name. I had seen lots of photos of those arches and was so excited to see them in person. They didn't disappoint! 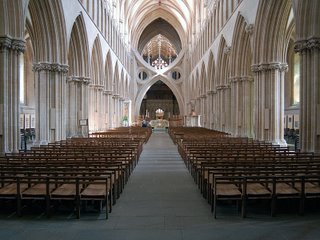 They look Art Deco and modern to me, but they're actually medieval - built in 1338-48 to help support the sinking tower. People apparently love them or hate them - my book on English cathedral architecture hates them and says "effort must be made to think them away." I think they are fantastic.

The rest of the cathedral was nice too, with lots of interesting things to look at. There was a medieval clock that still showed the sun going around the earth (the Jesus sculpture is modern; the guy sitting nearby kicks his legs on on the hour), and a very old baptismal font that is the only surviving part of the original cathedral (700s).

David took a photo of a sculptured angel's face that I think is a real award-winner (see below). The closeup of the painted stone is my artsy shot (I love old paint) - note the interesting black shape that looks a lot like a person! The choir was unusually colorful, in that all the seats have embroidered cushions (from the 1950s). 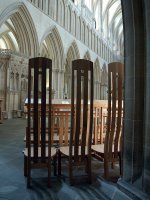 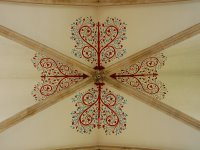 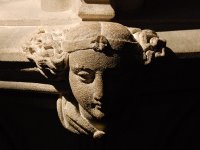 There were plenty of tombs of important people, including this interesting two-tiered tomb of a bishop, with the traditional effigy on top and a more realistic representation of the tomb's contents below:

In the back of the cathedral, some well-worn stairs (below) led to the chapter house, where the cathedral canons still meet to discuss cathedral business. It's a small octagonal room decorated with some funny faces similar to the Temple Church in London.

Behind the cathedral were some nice cloisters, with gravestones and St. Andrew's Well. In the yard was a very cute and strange orange cat, who was so intent on his nap that he didn't open his eyes or move even when I petted him. (But he was warm, so that's good.) 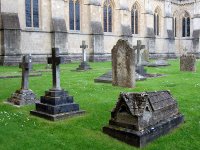 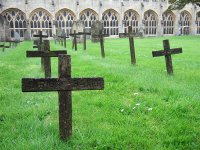 Next we drove to Glastonbury, which is only about 10 miles further south from Wells. Glastonbury is famous as a pilgrimage site for medieval Christians and modern New Agers, and the burial place of King Arthur. Arthur's tomb was conveniently discovered here in the Middle Ages when the monks of Glastonbury Abbey needed money for rebuilding. Today, the whole place is very New Age and Neopagan, with lots of dreadlocks, long skirts, and shops with books on "magick."

Our first stop was Glastonbury Tor, a small hill that has reportedly been sacred for 10,000 years. On top of the hill is a tower, which is all that remains of a 14th-century abbey church. The last abbot of that church was hanged here at the Reformation! The hill wasn't too hard to hike, and there were really great views in every direction from the top. 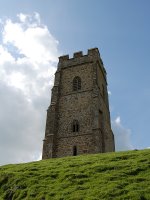 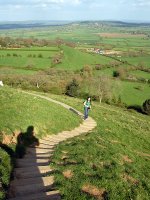 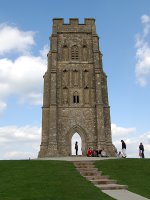 After the Tor, we headed for the main attraction, Glastonbury Abbey. In additon to its Arthurian connections, it's a very pretty ruined abbey and we were excited to check it out. But it was closed! We were just about a half-hour too late. We were so disappointed, especially since it had now gotten beautifully sunny and we could tantalizingly see some of it over the wall. Oh well, we'll have to come back another day.

By now it was about 6:00, and we started the drive home, by a different route than we came. We soon ran into trouble, as the road was closed that we needed to get to the motorway. But David and Wilma found an alternative route, using some very rural single-track roads. It was great fun.

When we were turning around in the middle of nowhere, we came across a castle! We parked and wandered in to check it out. Outside, right next to the road, was a peahen (lady peacock) pecking around. She was really funny looking, but probably thought the same about us! 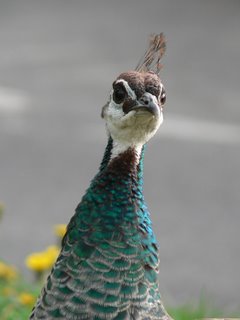 Inside the castle gates, we wandered around alone, not sure if it was public or private, and found a beautiful peacock. Those tailfeathers were really something to see up close, especially perched on a castle tower! 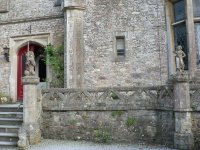 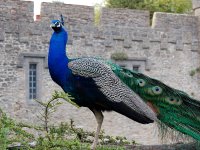 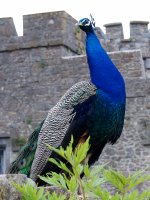 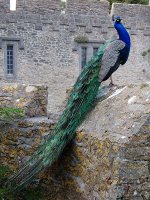 We eventually came across a woman who told us it was a private residence but also a B&B and restaurant. She said it's not as old as it looks - only a "Victorian folly."

On our route back to Oxford, we passed through a city called Cheltenham. We had seen it on the map but never knew it was anything worth visiting. We really liked what we saw as we drove through! We saw nice restaurants, pretty architecture, and fancy shopping. I looked it up in my Lonely Planet guide, and we learned that it is actually a hot-springs spa town that was a major rival to Bath in the 1800s, and it indeed has great shopping and gourmet restaurants. It's only about 40 miles from home on a major highway, so we look forward to returning.