Posted on April 12, 2006 by Holly Hayes
Part of: Graduate School in Oxford

Last weekend we went on a wonderful driving tour of prehistoric England and it was such fun!

The Uffington White Horse is not too far from Oxford and was our first stop. It is a giant stylized image of a horse on a hillside, made from scraping away the topsoil to reveal the underlying white chalk. It's difficult to see it all from the ground, but we still got a decent view of it from the nearby hill (it's in both of these photos - click to enlarge!):

The White Horse dates from as early as 1000 BCE and is thought to be a tribal symbol or dedicated to a Celtic horse goddess. The site is now part of a national park and you can walk all the way up to the horse to check it out up close (another time). 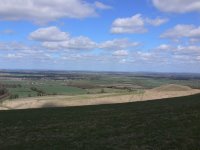 There are several other prehistoric sites at Uffington, including various burial mounds, forts, and Dragon Hill, where St. George killed the dragon (flat-topped mound on the right, below).

There was such a beautiful view of the surrounding countryside from up there. We could see for miles, and even watched a tiny train go by in the distance. It would be a fabulous place for a summer picnic.

The landscape on the hill was really dramatic, and the White Horse overlooks a rather scary dropoff between hills. It seems to suit these sheep just fine, who stared at us intently as we passed them on our way up the hill, and then all looked away in unison. 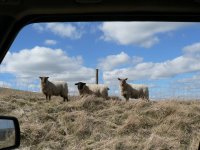 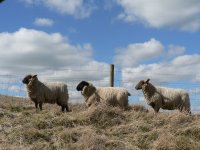 It was really cold up there due to ridiculous high winds (I had great difficulty keeping my hair out of the pictures), and we had lots more to see elsewhere. So it was off to Avebury!

The stones were huge and carefully placed in a huge circle (much bigger circle than Stonehenge) and it's just incredible that these ancient people went to such trouble to stand them up. The date is estimated about about 2500 BC. Wow.

The standing stones in the photos below are some of the biggest at Avebury and are together called "The Cove." These are aligned to the moon's path and may represent male and female. On the right, David verifies for himself that the stone is indeed very heavy. There's no substitute for this sort of scientific experimentation!

Another really wonderful thing about Avebury is its setting. The big bank-and-ditch henge and the stone circle surround the cutest little English village (thatched roofs and everything), and the stones are set in lovely grassy fields with sheep (and cute little lambs!) wandering around. It has a very calm, roomy feel that you don't get at Stonehenge. We really loved it. 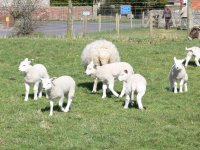 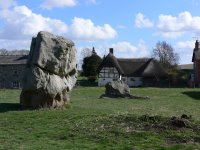 Next it was on to our first visit to Stonehenge! We prepared ourselves for disappointment, as everyone says how terrible it is that two highways run right past it and that there are a ton of tourists. But I'm happy to say we were both still really impressed and weren't disappointed at all. When the famous stones first appeared up ahead on the horizon, we both said, "Wow!" So cool to see such an iconic monument in person.

And Stonehenge really is famous for good reason. The circle is fascinating in its shapes and alignment with the sun, and it baffles the mind to imagine how they got those giant stones up there. They got some of the smaller ones (only a few tons) from Wales - 250 miles away!

Of course the big question is, "Why?!" Nobody really knows for sure, which gives Stonehenge its wonderful air of mystery.

What a fun day, and what an opportunity to see such amazing sights! Hurrah for living in the UK. The drive itself was quite lovely and we went through so many great villages. We stopped at one of them to explore its great parish church (right).

David has a four-day weekend for Easter, and we plan to go to London at least once. We thought about a longer trip, like to York or Canterbury or maybe even Berlin, but sheesh, even trains and the budget airlines aren't so cheap. But London is wonderful and could keep us occupied for weeks, and we're both really looking forward to going.