The start of term!

Posted on October 10, 2005 by Holly Hayes
Part of: Graduate School in Oxford

Sorry we haven't posted anything in a few days. Mostly it's because we didn't do anything terribly interesting over the weekend. For the most part we just did what has become our "usual" here. We walked around town, wandered around in a couple colleges, did some shopping, I did lots of reading, we watched a DVD on the laptop, etc. 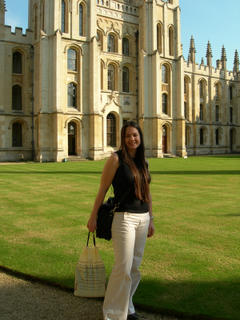 This week is much more newsworthy, though! Michaelmas Term 2005 officially began yesterday (yep, on a Sunday), and I went to my first lecture today. It was SO GREAT. (This picture was taken shortly after, at the nearby All Souls College.)

The lecture was at 12 noon, a very civilized time to have a lecture (none of that 8 AM business I had to do in college). Gave me plenty of time to get my beauty sleep, take a shower, have some breakfast, and make the bus/walk trek into town. And the nice thing about David not having a job yet (anytime now!) is that he rode the bus with me and walked me to class.

As background, the lectures I'll be attending throughout the term aren't "required." There's no roll call, no grades. All that's ultimately required is that I perform well in the scary three-hour examinations that will occur at the end of each term, and after that I need to write an insightful, intelligent thesis. But I'll have plenty of time to stress about those things later. For now, it's my job to become as educated as possible and to take advantage of the incredible opportunity I have to study in the hallowed halls of Oxford.

My first lecture was for a course called "Constantine and the Christian Church." It's about Emperor Constantine the Great, who ruled the Roman Empire from 306 to 337. He was the first Roman emperor to convert to Christianity, which naturally had a major impact both on Christianity and on the Roman Empire. Once the emperor associated himself with Christianity, the previously persecuted and marginalized religion suddenly became popular and even state-supported, and went on to become the dominant religion of the Western world. But devotion to the pagan Roman gods didn't just go away, even for Constantine himself, so it's a very interesting period both religiously and historically.

Anyhoo, in addition to the content which I obviously enjoyed quite a lot, the lecture was nifty in itself. It was in the Examination Schools (called "Schools" for short), which is a lovely building in the city center next to several old colleges. It is where those intimidating three-hour examinations that I mentioned earlier will happen. But it's also used for lots of lectures, and from what I can tell, has at least a dozen rooms available for that purpose during term.

The sidewalk outside Schools was crammed with students and parked bicycles. A wooden door led from the sidewalk into a large, high-ceilinged lobby, which was also crammed with students. They use an interesting system to assign rooms to lectures in this building. My lecture list didn't give a room number, just "Schools." Then, when I arrive in the lobby, everyone crowds around a huge flat-screen monitor hanging from the ceiling like in a train station to find which room our lecture (listed by title and name of lecturer) has been assigned to. The whole process is an interesting combination of ancient with modern!

I was in Room 5, which David walked me to and peeked in as I went in. We planned to meet afterwards in the main pedestrian street called Cornmarket, and then I headed into my first class at Oxford! It was a fun room - students sat at two rows of long desks, which had windows on one side and giant oil paintings of important-looking men from centuries ago, wearing academic-type hats and puffy sleeves.

Our lecturer came in not long after I did, wearing an academic robe over his suit. Nifty! His name is Dr David Gwynn, and I had met him at my meeting with the Faculty of Theology as he's also one of the teachers of my Historiography seminar. His specialty is Early Christianity and he did his doctorate on "Court bishops under Constantine" at Oxford just a few years ago (I Googled him). He's now a member of Christ Church College, which happily means that the seminar he's teaching this Friday will be in a lecture room in Christ Church.

The audience of the lecture seemed to be mostly second or third-year undergraduates in history, but anybody can come to any lecture so there was a wide assortment. But the intended audience made it even more interesting to me, as he focused his teaching on the importance of Constantine primarily for human history in general, not just for Christian history. The lecture was a nice mixture of information I knew already but could stand to be reminded of, and completely new information that was quite interesting. The lecture was less than an hour.

Afterwards, I chatted with a guy from my program who had also come to the lecture and then streamed out onto the street with all the other students. The sun was shining (it was almost 70 degrees today - the best weather yet), I had my new English riding boots on (a lovely combination of fashion and comfort), I had just enjoyed a fun lecture, and I even knew which way to walk to meet David. I just felt so lucky to be here!

I know that a few months from now it will be cold and dark and I'll be preparing for an exam at 2 AM, and I may not feel so lucky. But I still will be then, too!

David and I had a nice lunch at his favorite French sandwich place, then we purchased my cap and gown and little velvet tie for matriculation on Saturday, which is good to have done. I had a choice of a regular mortar board (which is velvety and much nicer than my previous ones) or a "ladies soft cap," which made me look like Martin Luther. Needless to say, I went with the former. I got an "advanced student's gown," which is quite a bit different from the "fresher's gown," but not really any fancier. I still have to buy a white blouse to go with the ensemble - I don't think I even own a blouse!

That accomplished, we then took advantage of the nice weather to check out All Souls College, which was lovely. That's where I am in the photo at the top of this post. The bag I'm holding is my cap and gown, and the briefcase is my school bag for now, but it's rather heavy.

This evening we've just been reading and generally relaxing. I finally wrote a letter to Mom, and David is immersed in Dan Brown's "other" book, Angels & Demons. I have two lectures tomorrow, one at 10 AM and one at 5 PM - yay!