Posted on September 21, 2005 by Holly Hayes
Part of: Graduate School in Oxford

Okay, now that we finally have internet I'd better update y'all on what we've been up to the past couple days. We kept thinking we'd have web access in our room any second so we didn't stop by the internet cafe as before. And by the time evening rolled around with still no internet, I wanted to go to bed, not walk to the cafe! So I apologize for the delay, and here's what we did the last couple days.

Monday (Sept 19) was a day of administrative trials and tribulations. We spent the morning running errands at the college and university offices, getting forms signed and everything submitted for the elusive and all-powerful university card.

Then David took another look at his passport stamp, and noticed that the immigration officer stamped "employment prohibited" in barely-readable ink above the normal stamp. Oy vey. It's rather crucial that David be able to work while we're here! And we know he should be able to from everything we read and the prior entry clearance visa he had already gotten.

So David made half a dozen phone calls to the British Home Office and finally established that we needed to go back to Heathrow to get it fixed. Yep, back to Heathrow Airport. So we got on the airport bus and did our recent trip in reverse, but this time at least we had no luggage. 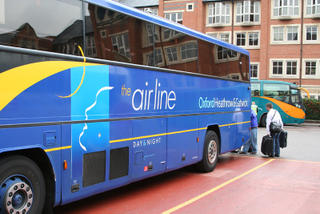 An hour and a half later, we arrived at the airport, managed to find the right desk in the right terminal, and a man from the immigration office came to meet us. He took our passports to the CIO, Chief Immigration Officer, whose name we never heard and face we never saw. It must be top-secret. The man came back not too much later with our corrected passports - there was just a line through the incorrect stamp and the indiscernible signature of the CIO.

The man who helped us was a Sikh and it was fun for me to check out his beard and turban up close and personal. Sikhs may not cut their hair or beards but also must keep them clean and neat at all times. The turban takes care of the hair, but the beard is more complicated, and it looked like he had it somehow elaborately folded and wired down or something. It ended up looking like he had a normal, neat short beard. Very impressive.

Then back to Oxford on the bus, where we did some more wandering around town and sightseeing before heading home. It was nice to spend the evening in after quite a tiring day.

Yesterday, Tuesday (Sept 20), was a really fun day. The weather was quite warm - perhaps even made it to the lower 70s. But it was colder in the morning and I didn't believe the weather would stay nice all day, so I wore a wool sweater and brought a coat. Oh, well. You just can't dress for this country.

We started off across the river behind Wolfson and into the nature reserve that belongs to the college. It was so beautiful and rural back there, like David said in last night's post. We walked along a footpath along the river, then through the university parks, and emerged in east Oxford near lots of colleges.

The major sights we saw on this walk included St. Cross Parish Church, with a neat old graveyard, and Magdalen College. Magdalen (pronounced "maudlin" for some unknown reason) is where C.S. Lewis taught literature, and it's also a gorgeous college. The chapel, like Merton College the other day, was huge and beautiful.

We had a late lunch at David's new favorite restaurant, Bonjour Rapide (we both had the felafel baguettes this time), wandered down the Cornmarket looking at the shops, then hopped on a bus to Summertown.

Summertown is an area of north Oxford that is slightly closer to us than the city center for shopping. It's where the internet cafe is that I wrote my previous posts from. We went to Marks & Spencers and another grocery store for some basics, then caught another bus back to our place. Actually, the bus only goes to the end of our road, Linton Road, and it's a decent walk from there. It was no fun with our very heavy grocery bags, but we made it.

We had dinner at home - pasta with pesto sauce from Marks & Spencers - and then spent much of the evening trying to get David's university card (which came in my mailbox around 6-ish) to work. We had little success there, but did do some interesting exploring of the college common rooms and dining hall.

By the time the internet in our room began to work I'd gone to bed, but it sure was nice to have it when I got up this morning! And David is so glad to be able to look for jobs online here at home - he already applied for four last night!